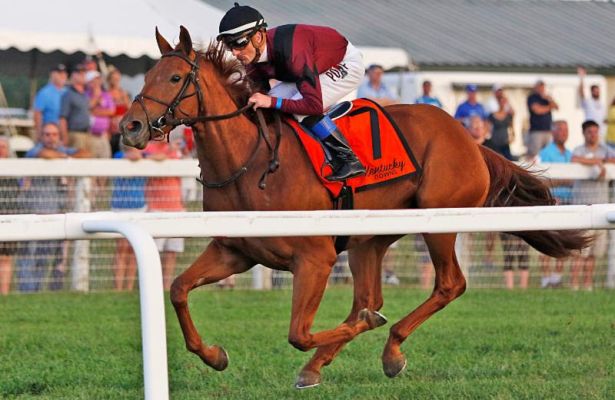 
She was a strong favorite, too, so the crowd got it right. At even money, the Christophe Clement-trained Miss Technicality paid bettors $4.00 to win, $2.80 to place and $2.20 to show, the lowest parimutuel prices of the day.


“It’s not easy to just ship in and run on this track,” said jockey Julien Leparoux, the defending Kentucky Downs riding champion who capped a three-win day. “She showed a lot of ability, and she’s a pro. She won at Belmont but I’ve been breezing her the last several times at Saratoga. She was working very well. The goal with Christophe was to come here. He loved her, and she showed a lot of ability. She won very easy. She traveled very good. It was just whenever I wanted to ask her, and she kicked on very nicely. Which is a good feeling to have on this track.”


Miss Technicality was content to lay back in eighth in the early going while City Diva, Lightscameraaction and Two Shakes contended for the lead. The latter one, second choice at 4-1, faded in the turn, but City Diva and apprentice jockey Edgar Morales led into the stretch, closely followed by Lightscameraaction ridden by Robby Albarado. But Miss Technicality, confidently ridden by Leparoux, made a sustained run to easily clear the field.


Lightscameraaction bested City Diva by a length for the place, with Noble Love less than a length further back in fourth. They were followed by My Wynter Rose, Lucky Girasol, Two Shakes, Zabava, Sexyama, Rogue Too, My Jilly and War Ballad. British Invader (GB), No Mo Temper and Road Tiger were scratched.


With the victory, her second in as many starts, Miss Technicality earned $230,640 from the $398,000 purse. She debuted at Belmont Park on July 6 and won despite hitting the gate at the start.


Clement also trained the winner’s sire, Gio Ponti, a winner of $6,169,800. Miss Technicality is owned by Terry Murray’s Namcook Stables LLC and John J. McCormack. Bred in Kentucky by McCormack, the striking chestnut filly is out of Double Jackpot, by Broken Vow.


“From Christophe’s point of view, he said, ‘John, I think I like this filly more than the way you talk about her. I like this filly; she’s been training well, and she’s improved in her training from her maiden win at Belmont,’” McCormack said. “And we were confident in the way she’s bred that she’s get farther. She’s a relaxed filly by nature and a kind filly to be around. She has lovely breeding with 40 years of engineering by the Phipps family. We’ve tapped into that, and grateful to have that opportunity.”


McCormack said Clement loves Kentucky Downs. “He really does. Like all trainers when they have one that has won first-time out, you have a little bit of the blue sky there and you look at different options. But Kentucky Downs is always in Christophe’s plan. Up at Saratoga he told me that. Christophe is such a great trainer, such a great guy, and we’re lucky to be part of his team.”


Said Murray: “Christophe was very optimistic about her. We knew this was a step up. He was very confident, and we of course as owners are always a little apprehensive. As it turned out he was right, and it was a great performance.”