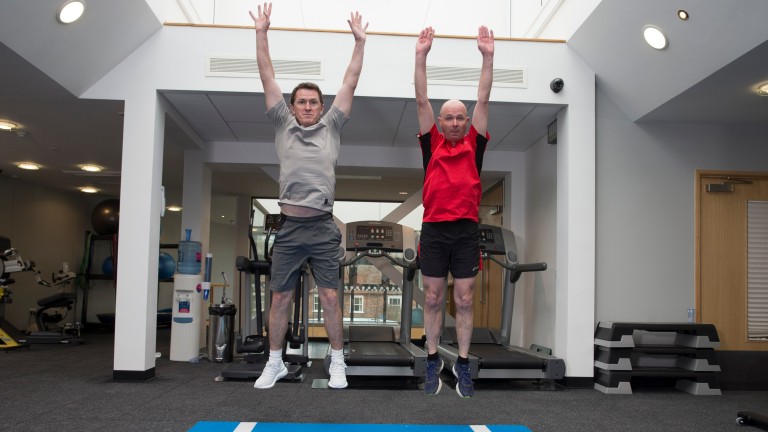 Less Jane Fonda and more Chuckle Brothers, the pair work their way through five exercises including squats and burpees at Oaksey House – with plenty of laughs, wobbles and fierce competition along the way.

“I’m not going to lie – at one point I didn’t think I was going to make it,” said Harvey. “But it was a lot of fun and the exercises were a real reminder of just how fit and strong proper jockeys are.”

McCoy, who claimed a victory – although by what metric is wasn’t clear – added: “Sport Relief is an incredible charity and the workout is a fun way to help get you moving.”

Vanessa Cashmore, whose recent studies suggested female jockeys are as capable as their male counterparts, has been awarded a £2,000 bursary from Women in Racing to further her research.

Cashmore, who is also the work-based learning manager at Northern Racing College, devoted part of her MBA to investigating the performances of both sexes.

“I’m grateful to the support of Women in Racing which will allow me to continue my research,” said Cashmore. “The study has strongly indicated that female jockeys are every bit as good as their male counterparts, but with such a vast array of data I am keen to further investigate race performances.”

Further information about the research will be unveiled at the Aintree Grand Women’s Summit, run in partnership with Women in Racing, on Friday, April 13.

The British Horseracing Authority has launched a digital careers map on its dedicated website careersinracing.com.

The service aims to give those interested in working in racing a simple, easy to use guide to the options open to them in the different parts of the industry, including the training possibilities available.

The BHA’s Zoe Elliott said: “This new resource provides a convenient, easy to use and helpful introduction to the wide variety of jobs available within racing.”