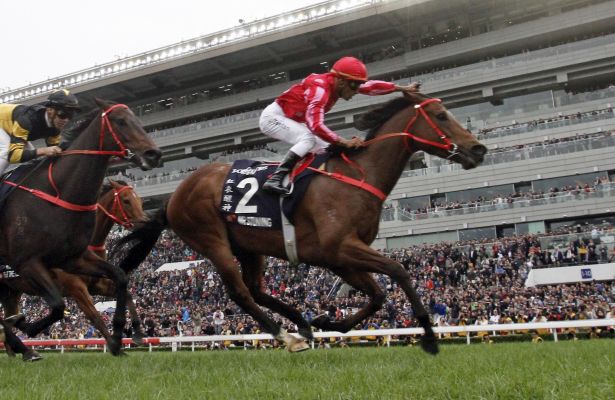 In a remarkable repeat of the 2017 edition, Mr Stunning not only again won the Group 1 LONGINES Hong Kong Sprint (1200 meters) but also secured the win at the expense of the same horse in a landmark success for his trainer and jockey.

However the similarities do not extend beyond the deja vu exacta of Mr Stunning and D B Pin as the winner was, last year, trained by John Size but is now in the hands of his one-time disciple Frankie Lor who was able to claim his first
Group 1 win.

It was also a first Group 1 win in Hong Kong for jockey Karis Teetan who, 12 months earlier, had watched the race from the grandstand and was overwhelmed with his breakthrough at the top level.

“He had a lovely trip through the race and I’m just so happy. It’s incredible. I’ve never felt like this. It’s the first time I’ve heard the crowd shouting like this. I just knew when I pressed the button he was going to go. He felt different
today, felt so good,” he said.

Mr Stunning was ably handled by the Mauritian jockey, slotted into the stalking trail, but even he conceded the race unfolded perfectly for the defending champion.

“When Ivictory went forward to put some pressure on Hot King Prawn, I was pretty happy about that. My horse never travels too hard in a race but he was really so relaxed underneath me today,” Teetan said.

Mr Stunning, last year, held a neck margin over then stablemate D B Pin. Today, he extended the break to three-quarters of a length in Hong Kong’s premier sprint race to provide Lor with his first ‘major’ in his second season of training.

“I’m very happy,” Lor said, “Karis did a great job out there. It took me a long time to get a trainer’s licence so I need to try my best to keep going and train more Group 1 winners. I think John (Size) might also be happy because I worked
for him and he was a great boss.”

Sam Clipperton, who rode the runner-up D B Pin, was so close to his most significant win in Hong Kong and was more than gracious in defeat.

“I just needed that luck and unfortunately, the luck enabled Karis to get a neck start on me and my horse is just held to the line. Well done to Karis, he deserves that win, he works bloody hard. I am very proud of my horse and he has run
a cracker only second up,” Clipperton said.

Size had both the minor placegetters with Beat The Clock beaten 1 3/4 lengths into third place which maintained his remarkable record of having finished top three at each of his 17 starts. The lowest rated runner Little Giant indicated
that he belongs at the top level with his 1 3/4-lengths fourth while Singapore’s Lim’s Cruiser fared best of the visitors in seventh.

The favorite Hot King Prawn wilted to finish ninth after being pressured in front. “He just didn’t race at his best today,” was all jockey Joao Moreira could offer immediately post race.

The race was delayed five minutes after Pingwu Spark, who could not be loaded into the starting gates, was scratched. Mr Stunning and D B Pin were two of the last horses to be loaded but fleet-footed from the start and emphatic at the end.

editor - September 2, 2018
0
TOM DASCOMBE is excited for the future following Arthur Kitt's fine effort in the Solario Stakes at Sandown. Arthur Kitt was readily passed by...