Can Eider Chase runner-up land another National for in-form trainer?

Former GP Richard Newland knows the prescription for long-distance success, having won the Grand National with Pineau De Re not to mention three runnings of the Durham National in recent years.

He has won with two of his last three runners and has high hopes for West Of The Edge, who finished second to Baywing in the Eider Chase at Newcastle last month.

“We were thrilled with his run in the Eider, where he just ran into one, and this looks a good race for him,” the trainer said.

“Conditions will suit and if he repeats that form he has a good chance. From everything we’ve seen of him the extra distance should be in his favour.

“The question is what did Newcastle take out of him? He seems fine, but it was only three weeks ago and you’re never quite sure until you run them.”

Newland also runs Bob Ford and said: “This is a bit more speculative. He was due to run in the veterans’ chase at Newbury but that was abandoned.

“He’s run at Uttoxeter before without much success and may not be suited by the track, but we’ll give it a go.”

Could any of the Eider victims turn the tables this time?

Hainan finished fourth at Newcastle and Milansbar fifth, but Back To The Thatch could be the biggest danger on this rematch.

He started third favourite at Newcastle and looked still to be full of running when he fell at the 16th of 25 fences.

“I’d just started to think, ‘he’s going quite well’, and all of a sudden he went, which was a bit frustrating,” recalled trainer Henry Daly.

“Fortunately it was a quite a soft fall for horse and jockey, and I hope this should be a nice race for him. You never know if they’re going to stay four miles two furlongs but he gives every indication he will.”

Stablemate and bottom weight The Artful Cobbler has won his last three starts and Daly said: “He has a nice racing weight and has crept into a £125,000 race off a mark of 121.

“He’s in very good heart at home and he’ll stay the trip and handle the ground.” 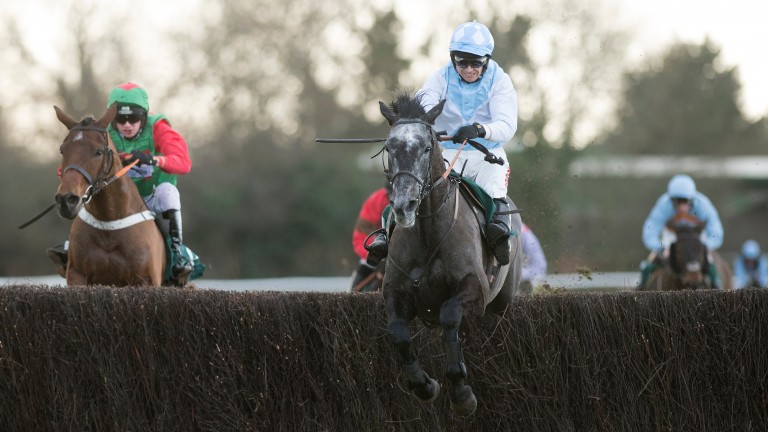 The Artful Cobbler: receives weight from all the rest of the field

Can Bryony Frost land yet another Saturday success on Silsol?

Paul Nicholls’ 3lb claimer Bryony Frost has had a remarkable first season as a conditional jockey, with a string of weekend successes on the likes of Black Corton, Frodon, Present Man and Milansbar.

She rides against the last-named Classic Chase winner here on board Silsol, who looked a dyed-in-the-wool stayer when the partnership stayed on to finish fifth in the Welsh Grand National at Chepstow.

“He gave me a fantastic spin in the Welsh National,” said Frost on Friday. “He got into a lovely rhythm. I rode him this morning and he’s in good stead.”

No topweight has won this since Bonanza Boy in 1991 but the jockey added: “He’s got top weight but that’s because he’s rated the best horse in the race – I’ll ride him like he is and I’m looking forward to it.”

Will weather spoil Uttoxeter’s biggest day of the year?

There will be an inspection at 8am but clerk of the course Charlie Moore said on Friday: “The track is perfectly raceable at the moment, although we’ve had 30mm of rain in the last week and the forecast is difficult to read.

“When the wind switches round to the east it could bring back the rain we had overnight or it could return as snow. It could also get down to -2C overnight but I’m hoping it will be only a slight ground frost.”

One or two fences may be omitted due to standing water but an extra one will be jumped this year as the start has been moved back 150 yards to help cope with the increased safety limit of 20.

Neil King, trainer of Milansbar
He was second off top weight two years ago and we’re claiming 7lb off him with Jack Andrews. He didn’t run badly in the Eider and he loves the ground.

Dan Skelton, trainer of Get On The Yager
We’ve had this race in mind for a long time and he ran a nice race at Southwell over just two and a half miles. You don’t know whether they’ll stay four miles two furlongs on heavy ground until they try it, but he gives every indication he will and he looked just the sort for this race when he won at Wetherby on Boxing Day.

Sue Smith, trainer of Hainan
He’s not very old and he’s learning his trade but he’s in very good form, he’s a stout stayer in the ground and I’m going there hopeful.

Tom Weston, trainer of Western Climate
He’s in good order, we’ve freshened him up and this has been the plan – we thought it looked more realistic than the four-miler at level weights at the festival. It will be last man standing but he looks to have plenty of stamina and, fingers crossed, appears to have as good a chance of coping with it as any of them.

Kerry Lee, trainer of Alfie Spinner, Krackatoa King and Russe Blanc
Alfie Spinner ran a fantastic race in the Welsh Grand National and he’s in equally good form at home as he was then. He’ll love the conditions and I’m hoping he’ll run another big race for Richard Patrick. Krackatoa King has won at Uttoxeter but this is an extra mile and it’s an experiment. The wetter the better for Russe Blanc and the further they go the better he is. He needs to come back to his best and we hope putting the blinkers back on will do the trick.

Iain Jardine, trainer of Plus Jamais
He’s in the form of his life and has come out of his last run bouncing. He stays three miles well and he’ll be ridden to get the trip. The ground is ideal and he’s at the right end of the handicap – he has a live outside chance if he gets the trip.

editor - December 27, 2018
0
I'VE been listening to the radio a lot in my week off work and have come to the conclusion that there's little better...