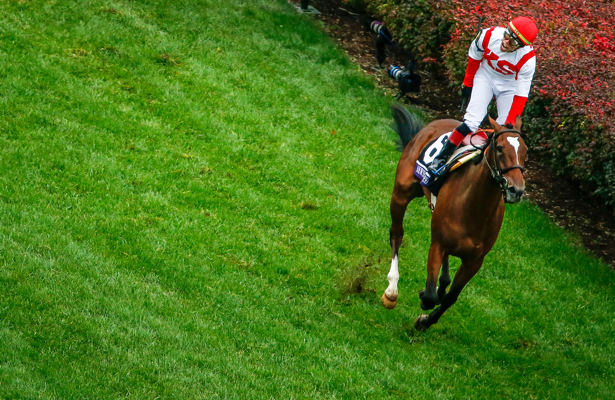 Newspaperofrecord, the unbeaten winner of the Breeders’ Cup Juvenile Fillies Turf, stands “head and shoulders” above her potential Royal Ascot foes should trainer Chad Brown make the trip back overseas with her this season, says British Horseracing Authority handicapper Grame Smith in a recent interview with RacingPost.com.

That’s trip back, because Brown and the Klaravich Stables team plucked the Irish-bred for just over $278,000 from a top European yearling sale in 2017.

“As things stand I think she’s set for the Coronation Stakes, and she’s not the stereotypical U.S.-bred, U.S.-foaled American filly coming over,” Smith said in the interview.

“…She has the pedigree to cope over here and I’m really looking forward to seeing her as she’s potentially very, very special.”

A daughter of Lope De Vega, Newspaperofrecord is 3-for-3, and her Breeders’ Cup score was among the best performances put forth back in November at Churchill Downs. The filly won by 5 1/2 lengths, guided easily as she could be across the wire by jockey Irad Ortiz Jr.

Brown has opted to keep his Juvenile Fillies Turf winners stateside in the past, most recently Rushing Fall coming out of the 2017 Breeders’ Cup. But given Newspaperofrecord’s breeding, she could be headed overseas for the Royal Ascot meeting in June.

The Coronation Stakes is a Group 1 event for 3-year-olds run at seven furlongs and change.

It’s not always easy to bring an American filly over to Europe because of the different way they race there,” Smith told RacingPost.com, “but in terms of ability she’s head and shoulders above what we saw in Europe.”

Smith added that Newspaperofrecord is “clearly better” even than Lady Aurelia, now retired, who won races at Royal Ascot in back to back seasons for trainer Wesley Ward.

Newspaperofrecord hasn’t yet returned to the work tab since her Breeders’ Cup score. Brown typically gets his 3-year-old turf fillies started in a race like Keeneland’s Appalachian (G2) set for Sunday, April 7.

Fourstar Crook Gets Up On The Wire In Hillsborough – Horse...

Who won the 1.05 at Chepstow live on ITV today?