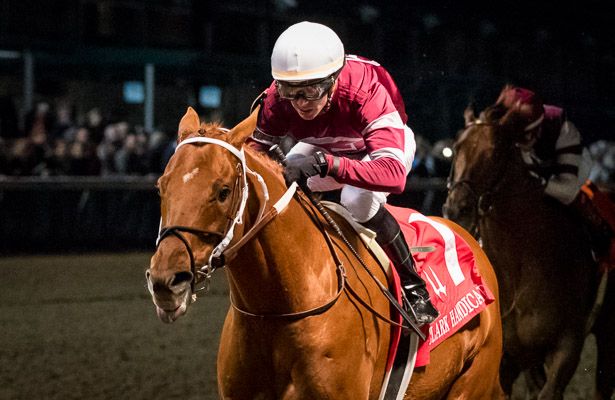 The Stronach Group announced Wednesday that nine of 12 contenders have been confirmed for the second running of the $16 million Pegasus World Cup Invitational set for Jan. 27 at Gulfstream Park.

“With just over a month until race day, we are in vigorous discussions and
negotiations for the final three coveted starting spots in what is shaping up to be an incredible 12-horse
field,” said Tim Ritvo, chief operating officer. “Once again, Pegasus will play host to many of the top horses, jockeys and horsemen in the world.”

Tickets, which range from $75 to $1,000-plus per person, can be purchased at PegasusWorldCup.com. From exciting views of the finish from the Grandstand, luxurious suites
and VIP experiences in Ten Palms restaurant or superb race views from the Apron, the venues at
Gulfstream Park offer the best for the ultimate day at the races.

• RELATED: Navarro waiting for the final call with Sharp Azteca

“The inaugural Pegasus World Cup Invitational surpassed our expectations, and we believe brought a
new level of excitement to Thoroughbred horse racing”, said Belinda Stronach, chairman and president of The Stronach Group. “We see Pegasus as an entertainment event that will appeal to
fans, seasoned and new, where music, fashion, celebrity, and world-class racing combine to create an
experience unlike any other.”

The nine confirmed starters for the 2018 Pegasus World Cup Invitational are as
follows (listed alphabetically):

Owner: William C. Gallo, et al
Trainer: Antonio Sano
The popular colt won the Fountain of Youth (G2) and was second in the Travers (G1) at Saratoga this
summer and finished in a dead-head for fifth in the Breeders’ Cup Classic. He has three victories over
Gulfstream Park and is training at Gulfstream Park West.

Owner: Winchell Thoroughbreds LLC/Three Chimneys Farm
Trainer: Steve Asmussen
Just two days before the running of Pegasus, Gun Runner is favored to be crowned 2017 Horse of the
Year at the 47th Eclipse Awards at Gulfstream. Under the care of Hall of Fame horseman Asmussen, Gun
Runner won five of six races in 2017, including four consecutive Grade 1 events. He capped off his
season with a gate-to-wire victory in the Breeders’ Cup Classic. The son of Candy Ride is training in New
Orleans.

Owner: Charles E. Fipke
Trainer: Dallas Stewart
Bred by Fipke, Seeking the Soul will enter Pegasus off his biggest win, a half-length victory in the Clark
Handicap (G1) at Churchill Downs November 24. The son of Perfect Soul is currently training in New
Orleans.

Owner: Mrs. John Magnier, Michael Tabor, Derrick Smith (Coolmore)
Trainer: Chad Brown
The lone filly or mare in Pegasus as of now, Stellar Wind earned an Eclipse Award as champion 3-yearold
filly in 2015. She reeled off three consecutive Grade 1 victories earlier this year and is the daughter of
two-time Horse of the Year, Curlin. The mare is currently in training at Palm Meadows Training Center
in Palm Beach.

Owner: Al Shaqab, Reeves Thoroughbred Racing, R.A. Hill, Eric Young
Trainer: James Osborne
Toast of New York returned from a three-year layoff earlier this month to win at Lingfield Park in Surrey,
United Kingdom. The 6-year-old was retired in 2014 after finishing second in the Breeders’ Cup Classic
for stallion duties in Dubai, but was returned to training in April. He has finished first or second in seven
of his nine career starts. He remains in the United Kingdom.

Game Over or War Story

Owner: Ron Paolucci and Ashley Quartarolo.
Trainer: Jorge Navarro
The connections are still considering which one of two horses they will have in the Pegasus starting gate.
War Story, a graded-stakes winner, would enter off a fourth-place finish in the Breeders’ Cup Classic.
The lightly-raced Game Over was most recently fourth in the Pennsylvania Derby (G1). Both are stabled
at Gulfstream Park West.

Owner: Gary and Mary West
Trainer: Bob Baffert
Winner of the Travers Stakes and third in the Breeders’ Cup Classic, this 3-year-old has won six of nine
starts and has never finished worse than third. Currently training at Santa Anita.

The Secrets Of The Saddle – Part Two

Elsworth hoping Dash Of Spice can cook up a storm in...

Scott Morrison backs decision to advertise a HORSE RACE on the...