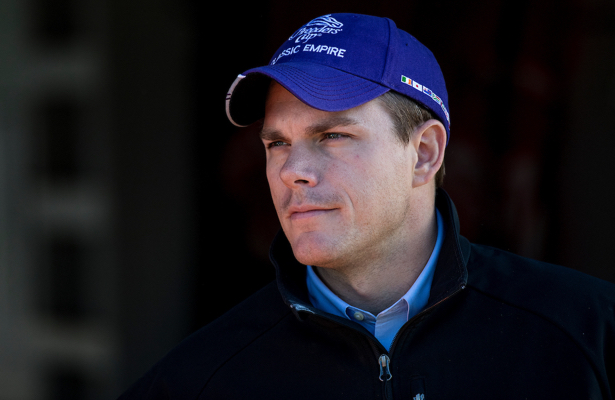 Norm Casse, a longtime assistant for his father Mark Casse before going out on his own earlier this year, recently notched the first victory of his training career at Gulfstream Dec. 23. The 35-year-old trainer will seek to win his first stakes at Gulfstream Park Saturday in the $75,000 Tropical Park Oaks.
Casse, who visited the Gulfstream winner’s circle with Marylou Whitney’s Hard Legacy after an optional claiming allowance victory last Sunday, will saddle Angel of Mischief for the Oaks.

The 3-year-old daughter of Into Mischief launched her career with a close second-place finish at Ellis Park on dirt before winning back-to-back races on turf at Kentucky Downs and Keeneland while equipped with blinkers.

“I think she’s pretty versatile. I think she can do both things and down the road we might see her running on the dirt, but Kentucky Downs obviously offers lucrative purses and it seemed like a natural fit to try her on the grass. She won so impressively it was hard to justify trying her back on dirt.  She won the a-other-than at Keeneland,” Casse said.

After winning a $135,000 six-furlong turf sprint at Kentucky Downs Sept. 9, Glencrest Farm and Hold Your Horses Inc.’s filly closed from far back to win a 1 1/16-mile optional claiming allowance going away by 1 ¾ lengths Oct. 11. She made a strong middle move before faltering to finish seventh over a yielding Churchill Downs turf course in the Mrs. Revere (G2) last time out.

“The last race was a disappointment but we believe she didn’t handle the soft turf and it’s just a throw-out,” Casse said.

In his first year of training a public stable, Casse has saddled 15 winners from 89 starters.

“I’m proud of what we’ve accomplished thus far. We set out a goal to win 10 races and we’ve won 15. We had a Breeders’ Cup starter within our first six months of training, which was something to be very excited and proud of,” said Casse, who saddled graded stakes-placed Bella Laura for a seventh-place finish in the Breeders’ Cup Juvenile Fillies Turf (G1) Nov. 2. “I’m proud of the fact that we’re not only winning races but winning races for legendary people like Glencrest Farm and Marylou Whitney.”

Julien Leparoux, who was aboard Angel of Mischief for her back-to-back wins, returns to the saddle after a one-race absence.

The Tropical Park Oaks attracted a full field of 14 sophomore fillies and a pair of main-track entrants. Blue Devil Racing Stable’s Too Cool to Dance, who hasn’t finished worse than second in five lifetime starts for trainer Chad Brown, has been rated as the 7-2 morning-line favorite.