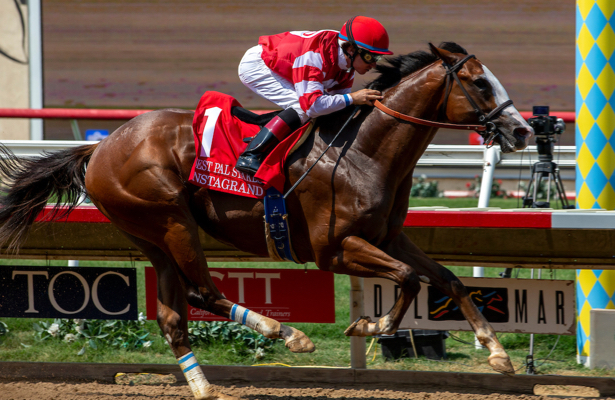 A sign that both have taken on money since the Wynn Las Vegas race book opened early 2019 Kentucky Derby odds, Roadster and Instagrand are now co-15-1 favorites. Yes, with more than eight months until the first Saturday in May…

Johnny Avello, the Wynn’s executive director of race and sports book, confirmed the drop in price from starting odds back on Aug. 3 of 25-1 for Roadster and 30-1 for Instagrand.

Roadster hasn’t run back since his first start, but it was an impressive one as the Bob Baffert-trained son of Quality Road sat behind horses before circling the leaders. In the irons was jockey Mike Smith — not known to ride debut runners — and the Grade 1 Del Mar Futurity on Sept. 3 is next.

Instagrand, a son of Into Mischief, backed up his flashy unveiling with another 10-length win over the weekend in Del Mar’s Best Pal Stakes (G2). He did it going wire to wire, with trainer Jerry Hollendorfer saying the Futurity is likely next for this colt, too.

Should either of those win the Futurity, they’d likely appear as the lone favorite when Avello opens wagering on a much longer list of 2-year-olds the second week of September.

Too Darn Hot can cook up another trainers’ title for John...