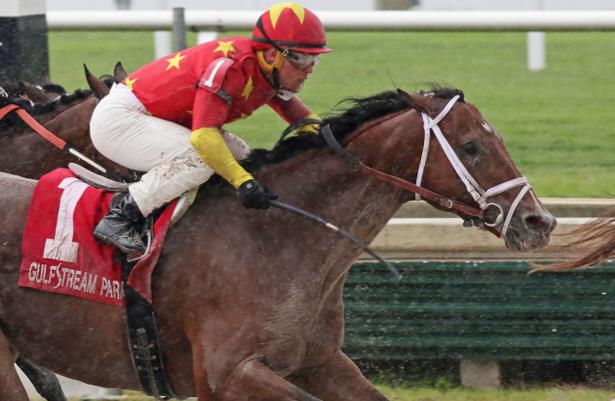 “Audible’s training really well,” said trainer Todd Pletcher. “I’ve been pleased with all of his works, particularly this morning. It was a good, solid five-eighths with a strong gallop-out that we were looking for.

“All indications are he’s in good form and coming up to the race very well.”

Audible worked in company inside Impact Player before drawing clear in the stretch and galloping out well ahead of his workmate.

Owned by China Horse Club, WinStar Farm, Head of Plains Partners LLC, and Starlight Racing, Audible followed up his Florida Derby triumph with a troubled third-place finish in the Kentucky Derby before going to the sideline for six months.

The son of Into Mischief fired fresh to win the seven-furlong Cherokee Run on the Breeders’ Cup undercard at Churchill Downs Nov. 3 but faltered in his most recent start, finishing second in the 1 1/16-mile Harlan’s Holiday (G3) Dec. 15 over a sloppy Gulfstream Park track.

“It wasn’t what we were hoping for. We needed a race to build him up for the Pegasus. It didn’t go as planned. He was a prohibitive favorite. Unfortunately, before the race, the skies opened and we got a downpour into a harrowed track. They tried to seal it after that but it was too late. I think, more than anything, he didn’t like the condition of the track,” Pletcher said. “He didn’t fire his best shot. He came out of it well and has trained better than ever coming into the Pegasus. It served its purpose in terms of conditioning.”

Pletcher noted that the 1 1/8-mile Pegasus will be Audible’s third start off a layoff, widely viewed as a positive from handicapping and conditioning perspectives.

“We eased back into it after the Harlan’s Holiday. We’ve put some good, solid five-eighths into him and I’ve been particularly pleased with the way he’s galloped out. This will be his third start off the layoff,” Pletcher said.

“I think a mile and an eighth is ideal for him, especially if there’s a good contested pace. That’s important for him. He likes to settle early,” he added. “If we can get some good solid fractions. Some of the main contenders have a lot of speed. If they mix it up a little bit, I think he’ll benefit from that.”

Brexit vote could have massive Grand National 2019 ramifications with Irish...