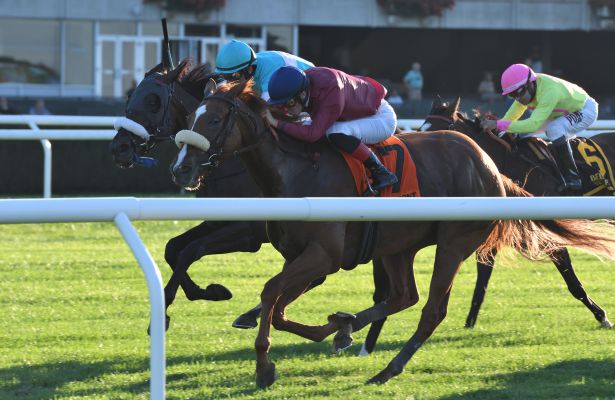 Alice Bamford’s homebred Californiagoldrush struck the front in the far turn and kept enough in reserve to hold off a late run from Secret Message as the 3-1 favorite in Saturday’s Grade 2, $400,000 Sands Point for 3-year-old fillies on the inner turf at Belmont Park.

Californiagoldrush broke well and settled in fifth early before making a big move up the backside under jockey Flavien Prat to join the pacesetting Shadan, who led the opening quarter-mile in a mild 25.85 seconds. The duo covered a half-mile in 52.05 and Prat backed Californiagoldrush off slightly to leave Shadan a length in front through six furlongs in 1:17.06.

Prat took another bid at the lead in the far turn, this time easily usurping a tiring Shadan and turned three wide for home with a length advantage. Secret Message, seventh early, made a wide rally from midpack in the turn but Californiagoldrush battled on to win by a half-length at the wire.

The victory was the first in a stakes and third overall for the lightly raced Californiagoldrush, a chestnut filly by Cape Blanco trained by California-based Hall of Famer Neil Drysdale. Californiagoldrush won her first two career starts and returned from a six-month-plus layoff to finish third in the Grade 1 Del Mar Oaks on August 18. The $220,000 winner’s share of the Sands Point purse pushed her career earnings to $322,00.

“I was trying to get over on the first turn and they were walking up front, so I decided to get a little closer down the backside,” said Prat. “I was a little worried about the track, it’s pretty soft, but she handled it well and she’s all class. She’s only gotten beat once in a Grade 1 after a six-month layoff, so she’s very talented. She just keeps improving and making us happy.”

Colonia checked in third, 1 ½ lengths behind Secret Message, and was followed by Victorine and Reversethedecision, who dead-heated for fourth. Shadan, Capla Temptress, and Barkaa completed the order of finish.