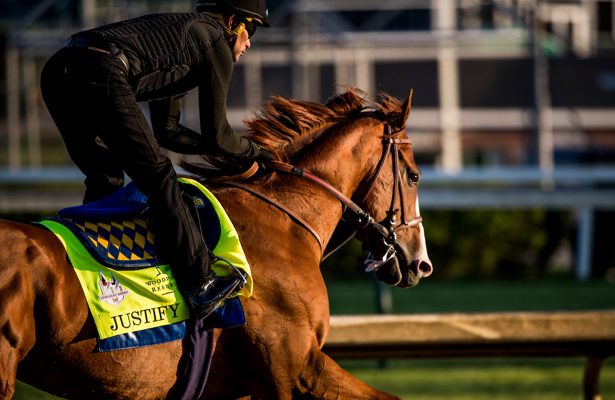 Trainer Bob Baffert welcomed news over the weekend that Good Magic, runner-up to his Kentucky Derby winner, Justify, had been confirmed to run in the 2018 Preakness Stakes.

“You want some good horses in there,” Baffert said Tuesday morning at Churchill Downs, where Justify put in a light gallop before his scheduled trip to Pimlico Race Course on Wednesday.

“There’s nothing wrong with taking another shot. He’s going to be tough. There’s some nice horses in there, so it’s not a gimme.”

Easy a.m. for Justify. Can’t even hear him. pic.twitter.com/BotmFj9Fsx

Good Magic is the anticipated second choice to the favorite, Justify, who should be odds-on when the gates open Saturday in the Triple Crown’s middle jewel. Baffert won his fifth Derby with Justify, a son of Scat Daddy, and will look to continue a streak that has seen each of those winners also triumph in the Preakness.

“So far, I don’t see anything that would make me think he’s not going to run a race, but you never know until you lead them up there,” Baffert said.

The Hall of Famer’s wife, Jill, usually asks just before the break what Baffert thinks of their chances.

“I think he’s doing well,” the trainer usually says. “Then they come out — and they’re smoking around there.”

That was especially the case for Baffert’s most-recent Preakness winner, American Pharoah, who he said ran arguably his best Triple Crown race in the second leg. Pharoah won over a wet track, with the same expected Saturday in Baltimore.

The similarities don’t stop there between the two.

“Their mechanics are smooth,” Baffert said. “They just float over the ground, and they’re quick. They’re quick enough to get out of a jam.”

Specifically on Justify, Baffert added, “He’s a big horse, but he’s really light on his feet.”

This marks the fourth straight year in which the Kentucky Derby runner-up has returned to challenge in the Preakness. On top of Good Magic, Bravazo and Lone Sailor are coming out of the Derby, too. The Preakness’ so-called “new shooters” are Quip, Tenfold, Sporting Chance and Diamond King.

Rival trainer Keith Desormeaux mentioned before the Derby that if there was any vulnerability for Justify Churchill, it was his size, a potential drawback to navigating through a 20-horse field. Jockey Mike Smith addressed that pitfall when Justify got away quickly from the gate, creating his own luck on the first Saturday in May.

While Baffert hasn’t weighed Justify since the Derby, he said the colt is “starting to trim up a little bit” now with four races — all wins — to his name.

“These horses are very rare to come by,” the trainer said. “You’d better just enjoy the moment, and my job is just to keep him healthy and sound. He looks great. We went real easy with him today. Yesterday we gave him a little bit of a stiffer gallop. He looks good. He’s got his bags packed, and he’s ready to go tomorrow.”

editor - January 1, 2019
0
Punchestown proved the difference once again as another remarkable...

With Supreme Court ruling, sports betting could become a friend and...

Horseracing Integrity Act to be heard by House subcommittee