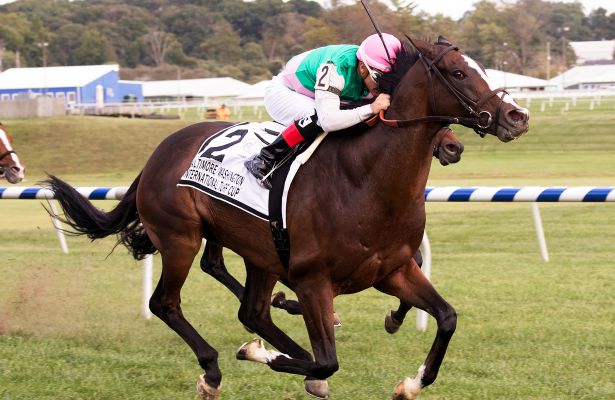 Projected capped his 5-year-old season in the 2017 BWI Turf Cup, rating well back while third through a half-mile before being swung outside and commencing a run that culminated in a 1 ¼-length victory as the favorite. The gelded son of Showcasing is the only horse returning from last year’s race.

This year Projected has finished second or third in each of his five races, all in stakes, beaten a total of 4 ¼ lengths. Most recently he was third by a head in the 1 1/16-mile Bernard Baruch (G2) Sept. 3 at Saratoga, a race where he took a one-length lead into the stretch before being denied in a three-way photo finish.

“I like the timing of this race and the fact that he’s proven over the course,” trainer Chad Brown said. “He ran a real good race last time. It was a close finish at the end and he just didn’t quite get there, but he ran really well. He’s just a real consistent, talented horse.”

Joe Bravo is named to ride Projected from Post 7. All horses will carry 120 pounds.

It was the second straight third-place finish to Synchrony in a Grade 3 for 6-year-old Irish Strait following the 1 1/16-mile Oceanport July 29. He hasn’t been worse than third in four tries this year, his lone win coming in the Dan Horn Handicap June 17. Both races came at Monmouth; he is 0-for-3 lifetime over the Laurel turf, running fourth in the Henry S. Clark Stakes last April.

“He’s been running against a solid graded-stakes horse that’s been winning. I think those races, though they were Grade 3s, were probably a little more competitive than they appeared,” trainer Graham Motion said. “He’s very consistent. He’s from a good family and he’s a very likeable, hard-trying horse. I think this race really is his distance.”

Jorge Vargas Jr. has been named to ride Irish Strait from Post 9.

Finishing second at odds of 12-1 in the Red Bank, a length and a quarter ahead of Irish Strait, is Gil Campbell’s Stonehedge homebred Abiding Star, a multiple stakes winner on dirt as a 3-year-old that is looking for his first black-type score on turf.

“His last race was a very good effort. He damn near pulled it off,” trainer Ned Allard said. “He’s doing really well. I don’t think this race is going to be a hell of a lot tougher than the race at Monmouth. I’m anxious to try again.”

Abiding Star owns three wins in nine career tries on grass but is 0-for-4 this year, running second and third in a pair of optional claiming allowances over the summer at Belmont Park, the latter to graded-stakes winner Blacktype July 5 in just his second start.

“He had his head turned sideways and they pulled it around and he went up in the air. He got totally left behind the field and he only got beat a length, and two jumps after the wire he was five in front. He was flying,” Allard said. “I didn’t even realize that he’d come from off the pace. We’d been in some races where he couldn’t make the lead and he didn’t run as well as we were hoping he would, so when he got left I thought, ‘Well, that’s it for him.’ He got wheeled to the outside and he came flying, so he can do it.”

Marc Detampel’s Siem Riep has finished in the money in seven of his eight 2018 starts including three consecutive runner-up stakes finishes in the Midwest. He was beaten less than two lengths in each of the 1 1/16-mile Warriors Veterans July 14 at Indiana Grand, the Kentucky Downs Preview Tourist Mile Aug. 5 at Ellis Park and the one-mile, 70-yard Old Friends Sept. 6 at Kentucky Downs.

Three of the 4-year-old Tapit gelding’s five career wins have come at the mile distance, most recently in an optional claiming allowance June 23 at Churchill Downs. The BWI Turf Cup will mark his debut at Laurel, his 12th different track in 17 starts. He ran fifth in his unveiling last May at legendary Pimlico Race Course.

“I think he’s been kind of steadily improving as he’s gotten older,” trainer Ben Colebrook said. “Physically he’s a big horse and he’s finally filled out. Each race has gotten a little bit better. He hasn’t been able to win a stake yet but he’s run some winning races and he’s just run into another horse that has been better on the day. His numbers have been steadily improving.”

Named for a city in Cambodia, Siem Riep will have the services of Feargal Lynch from Post 6.

Long On Value delivers in Highlander Stakes for new connections

Two Saturday longshots to fill your pockets at Cheltenham from Jack...

Eclipse Awards finalists to be revealed live on Saturday