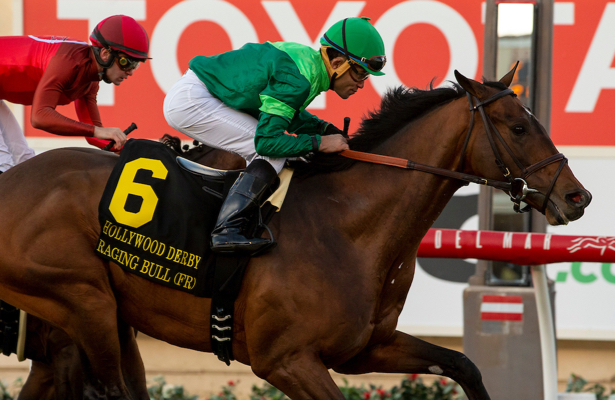 Under jockey Joel Rosario, Raging Bull gobbled up ground with an outside ride to give trainer Chad Brown his second victory in the 1 1/8-mile race following Annals of Time in 2016.

“I thought I was on the best horse, so I rode him that way,” Rosario said. “With him, he has a powerful quarter mile kick at the end. Terrific acceleration. So I just needed to keep him outside; keep him in the clear where I could ride him at the finish. It worked out just the way I’d hoped.”

Behind the front two, who separated from a well-bunched pack late, the Kentucky Derby’s fourth-place finisher, Instilled Regard, finished in the money in his turf debut, while longshot Prince Earl also hit the board.

The 9-5 favorite in a full field of 14, Raging Bull ran to nine furlongs in a final time of 1:48.34 over turf upgraded to firm Saturday afternoon after rain earlier in the week.

“I expected him to be a little closer in the first part,” said Jose Fernandez, assistant to Brown. “The speed had been holding in the earlier turf races. But he came from off the pace very well. (Joel) Rosario is a good rider and he knows what he’s doing, especially here in California. One (race) down, three (horses to saddle in Sunday’s Matriarch) to go.”

Raging Bull, bred in France, runs for owner Peter Brant, who also recently scored in the Breeders’ Cup Filly & Mare Turf with Sistercharlie. The 3-year-old colt improved his record to 5-1-0 in seven starts with two other graded stakes win, both in New York.

Notably, recovering Hall of Fame jockey Victor Espinoza was on hand to present the Hollywood Derby trophy along with actors Luke and Owen Wilson. Espinoza has been out since July after a morning training incident and has said he hopes to return to riding at the upcoming Santa Anita meet beginning Dec. 26.

Down Royal’s last race meeting will be on Boxing Day