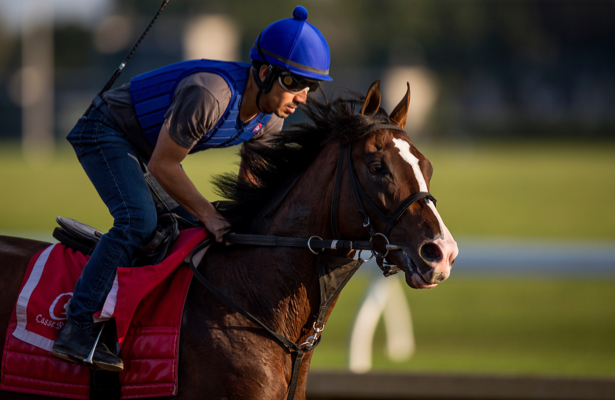 They call him ‘Wow’.

Sure, it’s an acronym for his name, but it’s also the first thought that came to mind when the connections of Grade 3, $200,000 Lecomte Stakes contender of War of Will watched him train.

Owned by Gary Barber and trained by Mark Casse, the 3-year-old son of War Front showed promise even prior to kicking off his career, which is why Casse ran him against graded stakes company three times as a maiden. However, it wasn’t until War of Will’s fifth career start, and in his main track debut, that the colt won.

“He’s a horse that we loved as soon as my brother (Justin Casse) bought him,” Casse said. “Our assistant Jamie Begg had him for about two weeks at Belmont and said that he was special. We kind of rushed him into his maiden race, and I thought he would have a good chance to win the Summer Stakes (at Woodbine).

“Finally, in the Breeders’ Cup (Juvenile Turf) he had a really wide trip so he ran an exceptionally well fifth considering the hand that was dealt to him. Early on, we felt like he needed to stay on grass, but he trains as good as a horse can train on the dirt.”

It was after the Breeders’ Cup Juvenile Turf that Casse decided War of Will needed some main track experience, so he ran him in a two-turn maiden special weight event over a sloppy track at Churchill Downs. With jockey Tyler Gaffalione, War of Will hit the wire under a hand ride.

The Lecomte kicks off Fair Grounds’ three-race road to the 2019 Kentucky Derby that also includes the Risen Star (G2) and Louisiana Derby (G2). As of Wednesday, the National Weather Service calls for a heavy chance of precipitation for Saturday in New Orleans.

“Weather could play a factor, even though I think a little moisture in the track won’t hurt our feelings,” Casse said. “This is a heck of a race. It’s going to be a trip. It’s a mile and 70 yards with a big field and quick run to the first turn. You’re going to need luck, and it can’t be bad.”

Justin Casse bought War of Will from the Arqana May Two-Year-Old Breeze Up Sale in France last year. He is out of the Sadler’s Wells broodmare Visions of Clarity, who is a half-sibling to multiple Group 1 winner Spinning World, the 1997 Breeders’ Cup Mile winner. Other than War of Will, she also produced Irish Group 1 winner Pathfork and two-time dirt marathon stakes winner Tacticus.

Casse also sends out Mo Speed in the Lecomte, but the son of Uncle Mo is still not definite to run.

“We’re still contemplating it,” Casse said. “He hasn’t proven that he is that caliber, but I do see the race possibly setting up for him. We may run him just to see how he fits in the big picture. It’s a discussion that I need to have with the owners, and it probably won’t be decided until the day of the race.”