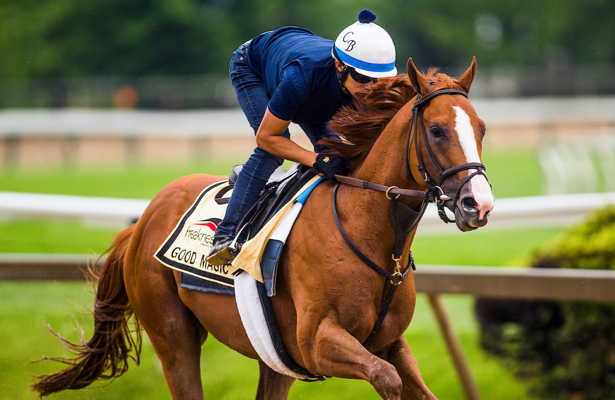 After finishing ninth of 10 in last Saturday’s Travers Stakes, champion colt Good Magic is headed to co-owner Stonestreet Farm in Kentucky for time off, the Thoroughbred Daily News reports.

Bob Edwards, whose e Five Racing owns the other share in the son of Curlin, told The TDN that when it comes to future race plans, “We’ll let the horse tell us what he wants to do.”

Of course, via Good Magic’s Grade 1 Haskell Invitational win, connections have a “Win and You’re In” spot for the Breeders’ Cup Classic on Nov. 3 at Churchill Downs. He remains possible to come back for that race, which would mark the chestnut’s first start against older horses.

“He deserves some time off,” Edwards said. “He’s done real well by us and he hasn’t been out of training at all and has been running hard since the Fountain of Youth and now deserves a break.”


Chad Brown said Thursday AM that Travers favorite Good Magic, who finished ninth, came out of the race sick. Brown said he had high white blood count and has been treated with antibiotics since. He will eventually ship to @StonestreetFarm for more tests. He is still in Saratoga.


In addition to his third in the Fountain of Youth (G2), Good Magic won Keeneland’s Blue Grass Stakes (G2), ran second in the Kentucky Derby and battled Justify early in the Preakness Stakes before fading to fourth, just a length back at the wire.

The 2-year-old champion, who broke his maiden in the 2017 Breeders’ Cup Juvenile, may also race again in 2019, with Edwards telling The TDN that “there’s some big money races out there.”

Big handicaps, potential stars and the jumps kicks into gear |...