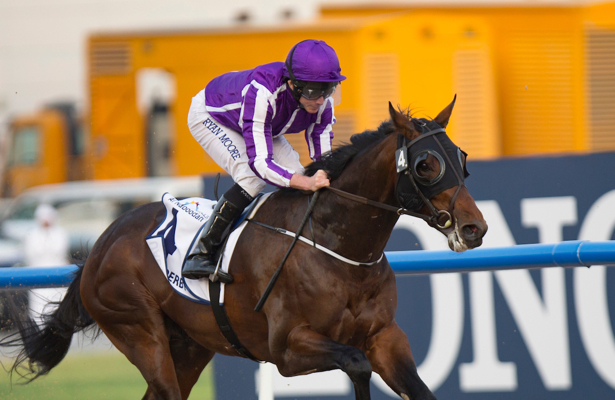 Mendelssohn finished fourth in the Grade 1 Cigar Mile Saturday at Aqueduct, and by Sunday afternoon Coolmore announced the 3-year-old colt was retired and heading to Ashford Stud in Versailles, Ky., where he’ll stand for $35,000 in 2019.

Trainer Aidan O’Brien told the Racing Post he was “disappointed” to see Mendelssohn retired. The change in plans knocked Mendelssohn out of contention for the Pegasus World Cup at Gulfstream Park Jan. 26 and the Dubai World Cup on March 30.

“The plan was made to go to the Pegasus and then for the Dubai World Cup,” O’Brien said to the Racing Post, “and he could have run in the Pegasus and still gone to stud, but the lads in Coolmore America were having so much interest in him that the decision was made to retire him.

“We felt we hadn’t seen the best of him, and thought the Pegasus was absolutely made for him over nine furlongs, but his stud appeal from a business side of things won out on this occasion.”

In the retirement announcement, Coolmore America manager Dermot Ryan said, “We have already had a huge number of (inquiries) about him and I have no doubt that he will prove extremely popular.”

The Duabi World Cup would have placed Mendelssohn back at Meydan, the same site of his romping UAE Derby (G2) victory this spring. Although the dirt was speed-favoring that day, Mendelssohn’s 18 1/2-length sent him to the Kentucky Derby. It also earned him a 106 Beyer Speed Figure.

Mendelssohn was bred in Kentucky and sent to O’Brien after Coolmore purchased him for $3 million as a yearling. He made one trip stateside at 2 and won the Breeders’ Cup Juvenile Turf. This year, he made six trips to the U.S. dirt from O’Brien’s Ballydoyle base in Ireland.

The Kentucky Derby was a flop as Mendelssohn experienced a sloppy surface and was hit at the break from post No. 14. He came back to hit the board in the Dwyer Stakes (G3), Travers Stakes (G1) and Jockey Club Gold Cup (G1), all in New York. He finished fifth in the Breeders’ Cup Classic back at Churchill Downs.

“He probably ended up being a little bit of a guinea pig,” O’Brien said, “because we were learning as we were going along with him.”

editor - October 6, 2018
0
The horse that has seen the most money placed on it on Oddschecker today runs in the 16:25 at Newmarket. QAZYNA has been smashed...

Conflicts of interest in horse-racing – Opinion

Let’s make sure British sport can compete with the best beyond...

BHA probes another cobalt case in the UK after first positive...