Lalor claimed an emotional success in the Betway Top Novices’ Hurdle at Aintree.

The racing world was left shocked in January after it was announced trainer Richard Woollacott, who was based in South Molton in Devon, had died, aged 40.

Lalor provided Woollacott with his first big-race success when winning the Grade Two bumper at this meeting a year ago and he was a 14-1 shot to strike Grade One gold on his return to Merseyside, running in the name of the trainer’s wife, Kayley.

With champion jockey Richard Johnson in the saddle, Lalor travelled strongly and moved to the front after jumping the third flight from home. Bedrock briefly threatened to cause a huge upset, but Woollacott’s charge kept up the gallop to prevail by two and a half lengths. Vision Des Flos beat a weary Bedrock to the runner-up spot.

Johnson told ITV Racing: “This is hard to put into words. It was very sad what happened and this horse last year was his first big winner. To come and do it again in his memory, for his family, is fantastic. It was a big shock what happened. Hopefully this horse will keep Richard’s name in lights for a long time to come.”

He added: “I hadn’t sat on him since last year and tongue in cheek I said it would be nice if we got the same sort of performance and I’d ride him the same way. He’s a lovely big horse who stays really well and it’s all gone to plan, he really put his head down after the last. It’s a special day for the family and I’m sure Richard is smiling as well.”

Tom Lacey’s mare lined up on Merseyside off the back of a good effort to finish second in a Listed contest at Warwick in February and was a 20-1 shot for this fiercely competitive handicap in the hands of Robert Dunne. The eight-year-old raced in midfield for much of the way, but began to make inroads on the leaders rounding the home turn and challenged for the lead jumping the second flight from the finish.

Runner-up Eaton Hill and the Alan King-trained pair of 13-2 favourite Who Dares Wins and Wilde Blue Yonder all came home strongly, but Jester Jet did enough to hold them at bay.

Dunne said: “She’s improved no end since Tom got her. I was confident she’d run a big race, even though she was a big price. She ran a nice race the last day and had improved again. We went a good pace which helped and I committed going to the second last because I knew she’d stay.”

Lacey said: “That was a super performance, I was a bit nervous bringing her here when the ground got really soft. She was in the three-miler, too, but on this ground we went for the shorter trip. She’s such a strong traveller and everything worked out. The owner bred her as well so it’s a special day.” 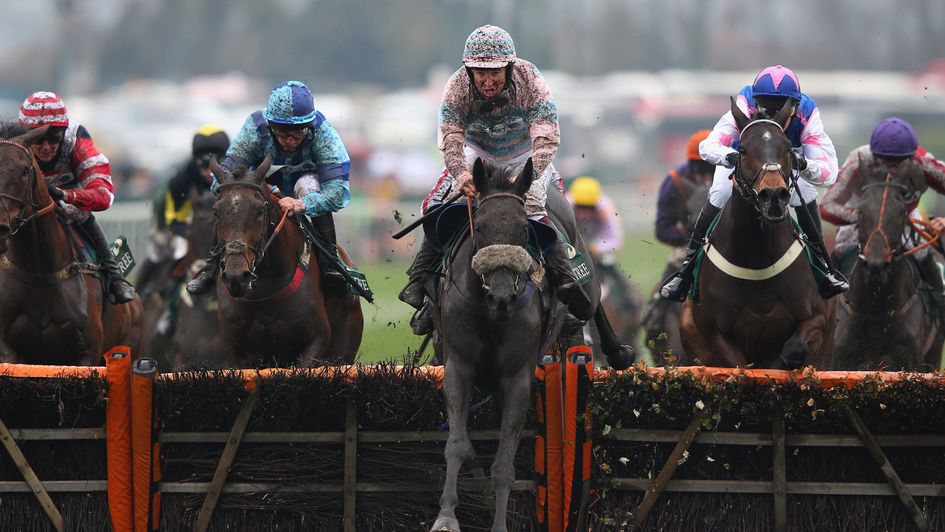 Jester Jet is control over the last

What to watch for: Baffert’s hold on Los Alamitos Futurity