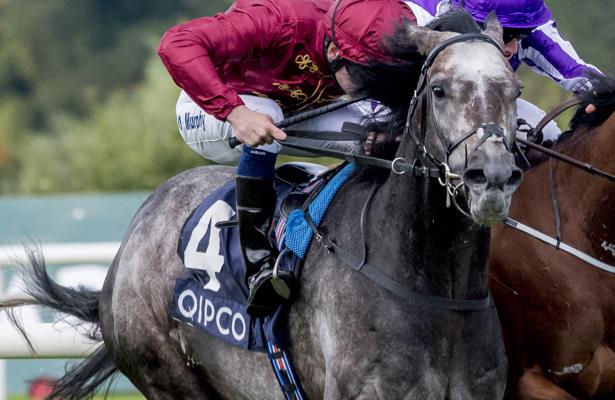 Roaring Lion, the likely European champion who has won four straight Group 1 race on grass, will indeed switch surfaces and run in the Nov. 3 Breeders’ Cup Classic at Churchill Downs, representing the latest piece of the puzzle solved heading into the $6 million race.

The Breeders’ Cup confirmed that news Friday morning as trainer John Gosden’s contingent makes its way to the United States. Also on an overseas Qatar Airways flight is Enable, the top filly expected to go as the Breeders’ Cup Turf favorite.

European-based horses arriving Friday evening at Churchill will quarantine for 42 hours and could train Monday.

Roaring Lion, a 3-year-old by Kitten’s Joy, most recently cut back to a mile last Saturday to win the Queen Elizabeth II Stakes (G1) at Ascot. He’s campaigned by

Sheikh Fahad al-Thani‘s Qatar Racing Limited, and the Sheikh has said he’d like to prove this horse is best in the world at a mile and a quarter before he’s sent to stud in 2019.

With Roaring Lion confirmed — he was also pre-entered in the Turf ahead of Monday’s post position draw — that leaves Gunnevera as the first horse out of the prospective Classic field. Seeking the Soul, Collected and Toast of New York are also seeking entry in that order of preference.

Trainer Tom Amoss said a decision is pending regarding last out Oklahoma Derby (G3) winner Lone Sailor. His first preference is the Classic.

Bravazo, who at the pre-entry deadline was first out of the Classic field, has since been re-routed to the Dirt Mile, his first preference race.

Who won the 1.55 Kauto Star Novices’ Chase at Kempton live...