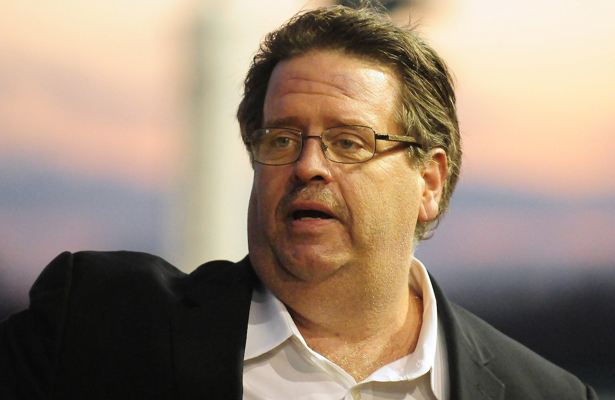 Last year at Gulfstream, Romans won the Fountain of Youth (G2) with Baron-owned Promises Fulfilled. Later that year, he added victories in the H. Allen Jerkens (G1) and Amsterdam (G3) at Saratoga and the Phoenix (G2) at Keeneland.

A 52-year-old native of Louisville, Ky., Romans grew up in the shedrow of his late father, Jerry, first taking out his trainer’s license at 18. He spent the winter of 1986 working as an assistant to late Hall of Famer Woody Stephens at Hialeah, and notched his first career winner Feb. 15, 1987 with Miss Mindy at Turfway Park.

Romans won the Preakness (G1) with Shackleford in 2011 and finished second twice, while also running third four times in the Belmont Stakes (G1) and twice in the Kentucky Derby (G1). He owns three victories in the Breeders’ Cup, the most recent coming with Little Mike in the 2012 Turf (G1) that helped clinch the trainer’s Eclipse Award.

During his championship season, Romans won 125 races, 20 graded-stakes and a career-high $11,834,249 in purse earnings. Nine of his stakes victories came in Grade 1 events, including two each with Shackleford, Tapitsfly and Dullahan.

Romans campaigned Roses in May to eight wins and four seconds from 13 starts and more than $5.4 million in purses, capping his career with a victory in the 2005 Dubai World Cup. Kitten’s Joy earned the 2004 Eclipse Award as champion turf horse under Romans’ tutelage, finishing with nine wins, four seconds and a $2.075 million bankroll from 14 starts.

“It’s great. My father said there’s a lot of ways you can judge your success, and one of them was to be around the game for a long time and last. I think I’ve been able to do that,” Romans said. “We’ve had 2,000 quality wins over many years, and it makes for a good career.”

Eclipse Award Finalists To Be Unveiled January 5 During Live Broadcast...

McKinsey, Seven Years On: How Has Racing Done? – Horse Racing...

Tumultuous scores back to back Magic Millions Trophy wins

Off And Running: New Virginia Residency Program A Certified Success –...

Thursday’s ITV Racing coverage – schedule and times for ITV and...