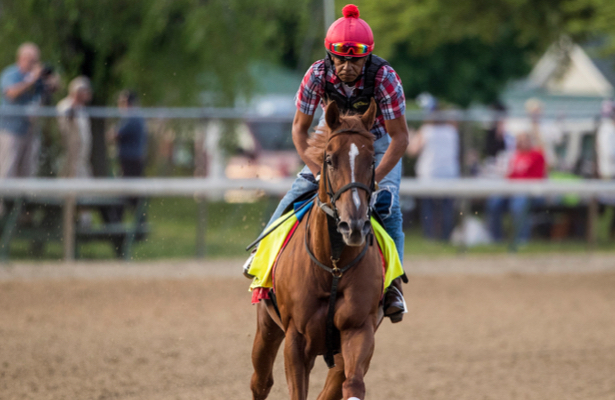 With both his Breeders’ Cup contenders fit enough, trainer Dale Romans only wanted to see Promises Fulfilled and Seven Trumpets “get around there” Sunday in their final works at Churchill Downs.

Mission accomplished, as the Sprint contender Promises Fulfilled breezed a half mile in 48.40 seconds and Dirt Mile runner Seven Trumpets five furlongs in 1:01.40.

“They both looked like they accelerated when they were asked,” Romans said. “I couldn’t be happier with them.”

Promises Fulfilled, who’s cross-entered in the Dirt Mile, lists the Sprint as first preference and drilled in that race’s saddle towel. The race determination is likely, but not final.

“The Sprint will most likely be where we end up, unless I get some urge late to go in the (Dirt) Mile,” Romans said for the Shackleford colt, a winner of three straight graded stakes having backed up in distance from his Kentucky Derby run in the sprint.

“I’ll tell you though on the up and up — if there was no other circumstance and someone put a gun to my head — I think he can win the Mile, because I think he’s got that much endurance. But there’s so much more riding on the Sprint.”

The Sprint’s $2 million purse is worth double that of the Dirt Mile, Plus, it appears the Sprint winner — barring an upset — will earn Eclipse Award honors.

“I don’t think anybody will be able to argue, because that’s going to be a very contentious field,” Romans said. “I think it’ll be one of the most exciting races on the card.”

Whereas Promises Fulfilled figures to be among the top choices in the Sprint, Seven Trumpets sizes up as a Dirt Mile longshot. The West Point Thoroughbreds runner hasn’t missed the board in four straight starts but is still looking for his first stakes win.

“Seven Trumpets is just the little engine that could,” Romans said. “He just keeps on coming — keeps on coming. He’s getting better and is knocking on the door. It wouldn’t surprise me a bit for him to jump up and run a monster race.”

Romans has a third horse pre-entered in the Dirt Mile ahead of Monday’s post position draw, the come-backing Dak Attack. A stakes winner at 2, the son of Ghostzapper went to the sidelines twice due to shin issues before returning to the races Oct. 10 with a runner-up in allowance company at Keeneland.

“Here’s the logic with Dak Attack,” Romans said. “He’s doing so well. I still do believe he’s a Grade 1 horse down the road. It doesn’t cost anything to (pre-enter), so if the race does happen to fall apart, and all the preferences went to the Sprint and all the preferences for the Classic went to the Classic, and you’re sitting there with six horses, we take a shot.”