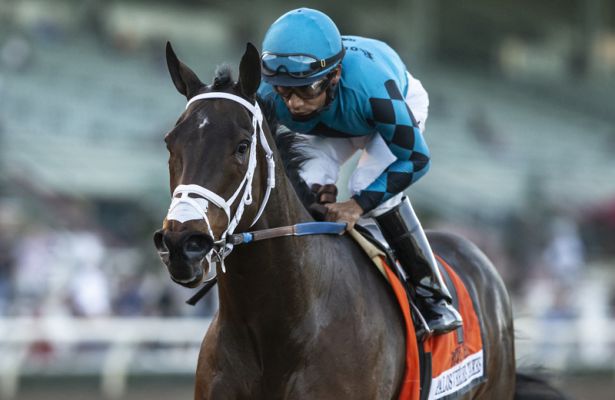 Roy H, trained by Peter Miller for Rockingham Ranch and David A. Bernsen LLC, is a finalist and the likely winner of the 2018 Eclipse Male Sprint title following
his repeat Breeders’ Cup Sprint victory. That award is set to be announced Thursday.

The trainer added Roy H will again try for the March 30 Dubai Golden Shaheen (G1), a race in which he was third last year.

“In the words of
Chic Hearn, he’s as cool as the other side of the pillow. Nothing bothers him,” Miller said. “Me on the other hand, I don’t ship so well. But he’s an unbelievable horse and
I thank Gary and Amy Hartunian (of Rockingham Ranch) for allowing me to train him.”

In the Palos Verdes, the 7-year-old More Than Ready gelding sat off Conquest Tsunami, who set opening
fractions of 21.44 and 44.35. Roy H galloped along in second with St. Joe Bay to his outside. Multiple graded stakes winner Kanthaka made his debut as an older horse and waited in fifth. He was previously eighth in the Malibu (G1) after a seven-month layoff.

It didn’t take much encouraging from Lopez for Roy H, favored at 1-5, to take over the lead. He spurted away before Lopez geared him down to a canter. Roy H still won by four lengths.

Kanthaka
rallied into second, but Roy H was too far ahead to make up enough ground. Conquest
Tsunami held for third.

The Palos Verdes increased Roy H’s bankroll to more than $3.1 million and improved his career to 10-5-2 from 23 starts.

“I got to start
working out with Roy because he’s running circles around all of us here,” Gary Hartunian said in the winner’s circle. “I
thought he might set a track record today, the way he looked yesterday. He just
found a perfect match. Pete Miller, a great sprint trainer. And Roy H might go
down as one of the better sprinters ever.”

Stewart: Woody Stephens ‘the next logical spot’ for Givemeaminit