Samcro’s connections are prepared to give him another crack at the best two-milers in the Ryanair Hurdle at Leopardstown.

For many, Saturday’s Grade One will be one of the highlights of the busy Christmas period – if only for the number of questions it should answer.

Gordon Elliott’s Samcro was seen as Ireland’s big hope to topple Buveur D’Air this season, after carrying all before him as a novice – but it has not gone to plan.

Beaten on his reappearance at Down Royal by Bedrock, who is back again, he was then put firmly in his place by the champion in the Fighting Fifth Hurdle at Newcastle.

He is one of three runners for Gigginstown House Stud – with stablemate Tombstone and Henry de Bromhead’s Petit Mouchoir also lining up.

“We’ll give two miles another shot, and we’ve got Tombstone in there to make it a true-run race,” said Gigginstown’s racing manager Eddie O’Leary.

“I think as long as it is a decent pace he’ll be happy, and that is the same for them all really.

“This is a very good horse race – there are some quality two-mile hurdlers in it, and it will take some winning.

“It is a long way from being Samcro’s race. It will take plenty of winning.”

Petit Mouchoir spent much of last season chasing Footpad over fences, but returns to hurdles after a problem.

“He’s starting back over hurdles, because he just had a little setback,” said O’Leary.

“Hopefully he’ll run a nice race, but he needs the run badly.”

Quite rightly Iain Jardine is feeling confident about Bedrock confirming the form from Down Royal.

He and Samcro were scheduled to meet again at Newcastle, but a minor setback prevented Bedrock from running, and this race was then chosen over the Christmas Hurdle at Kempton.

Jardine said: “One of the key reasons we’ve chosen to go over there rather that Kempton was Rachael (Blackmore) could stay on him.

“I’d hope he’s got a good each-way chance. We’ve been trying to select the right race, and I know it’s hot – but we’ll have a go. He’s a decent enough horse, so deserves his chance.

“Samcro might have improved between Down Royal and Newcastle, but Sharjah was back in third and he was fully fit. You can’t knock the form.

“He’s in good order; the ground is good, which he likes, so fingers crossed he’ll go well.”

Arguably the best form on offer is Melon’s Champion Hurdle second to Buveur D’Air, but he is making his seasonal reappearance for Willie Mullins.

“Melon was going to run in the Morgiana but he wasn’t sparkling in his work – so once we missed that, we said we’d come straight here,” said assistant trainer Patrick Mullins.

“He’s in good form at home, working much better now, and it will be interesting against Samcro, Supasundae – and you can’t discount Bedrock – but his run against Buveur D’Air is probably the best bit of form on show.” 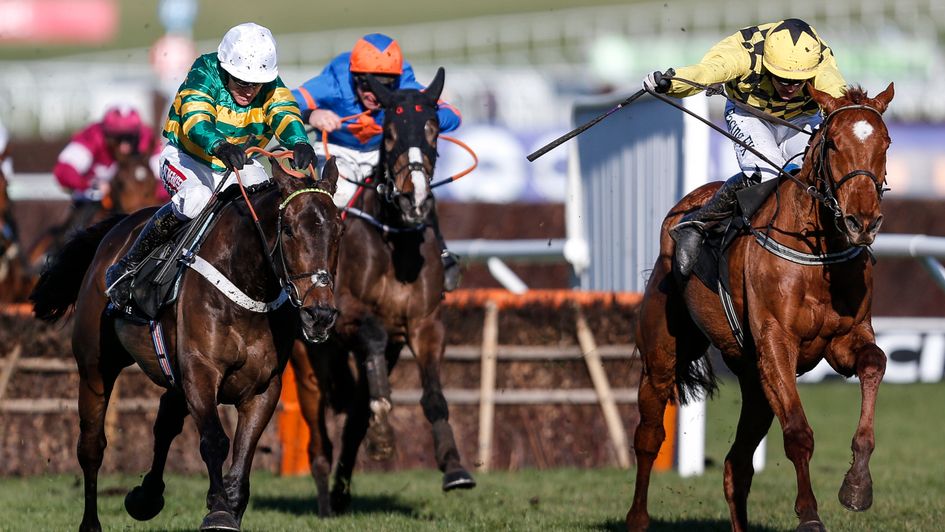 Buveur D’Air and Melon duel up the hill

The younger Mullins will be hoping Melon comes second, however, because he rides stablemate Sharjah – who beat former champion hurdler Faugheen last time out.

Mullins went on: “It’s fantastic to get my leg back over Sharjah. Obviously his win at Punchestown the last day was a career-best, but it still leaves him with only one rated lower in this – so he’ll have to step up again.

“It’s a red-hot race – but he was going to run very well last year at this meeting when he fell at the last, so I’m delighted to get back on him.”

Testament to the skills of his handler having been well-placed to land a Grade Three at Tipperary and then lower the colours of Samcro at Down Royal. That was opportunistic, his race-fitness advantage and better suitability to a sharp two-miles clearly contributing, but conditions are set to be similar here and he shouldn’t be underestimated. Third in both previous Grade One starts and won’t disgrace himself with ground ideal.

Gave Buveur D’Air a real fright in the Champion Hurdle before falling alongside Samcro at Punchestown. Not seen since and while he’s won both starts after an absence for this yard, they were at odds of 4/9 and 2/5 and in races he was expected to win. Returning at this level leaves little room for manoeuvre, although it helps that he looks a pure two-mile hurdler – something which can hardly be said about his chief rival according to the betting. Connections will be working back from Cheltenham but it’s hoped he’s fit enough to do himself justice having missed the Morgiana.

Scintillating winner of this race two years ago, having fallen when looking set to win the Fighting Fifth before that. Went on to beat Football at Leopardstown before third in Buveur D’Air’s first Champion Hurdle, so hopes were high when he made a winning debut over fences last year. Things didn’t go to plan thereafter as he was demolished by Footpad at both Cheltenham and Punchestown, and after a setback he returns over timber with the run expected to bring him on. Would need to be at his absolute best to win and is readily overlooked as a result.

Perhaps the most disappointing horse of the season so far, having been beaten by Bedrock on his return before put in his place by Buveur D’Air at Newcastle. No shame in the latter, but the idea that he’s going to be at his best over this trip seems absurd and we surely won’t see that until he sees a fence. Hasn’t stopped them making him favourite for this and he’ll surely have this race teed up for him, rather than attempting to make all at a peculiarly slow gallop last time. No excuses here, then, particularly with rivals having questions of their own to answer, and foolish to underestimate whether he’s a three-mile chaser or not.

Disappointing behind Bedrock and Samcro at Down Royal where making his own running, but back on track with a first Grade One success at Punchestown last time out. Clearly, runner-up Faugheen needs further than two miles to be seen to his best these days but it was nonetheless a likeable effort and this improving five-year-old will be suited by the likely tempo here. Has a little to find with his stablemate, Melon, as well as Samcro, but improving and has conditions to suit in bid to gain compensation for falling at this meeting a year ago.

Versatile eight-year-old who won two Grade Ones over two miles in the spring, albeit with notable fallers in behind at Punchestown. Well held on his return to action behind Apple’s Jade but has always needed a run to put him straight and no surprise connections have ducked a rematch with the mare in favour of this potentially more suitable assignment. Expected to go well at a track he likes and on ratings is the one they all have to beat.

A long way behind Sharjah two starts ago before trailing home 17th of 21 finishers in a Fairyhouse handicap. Not expected to take a hand in the finish although should help ensure a solid tempo.

This ought to be Samcro’s last chance to confirm himself a potential Champion Hurdle winner and he has plenty in his favour, not least the fact that a couple in the same colours should ensure the race is run at an end-to-end gallop. Still, he’s hard to support at the prices and preference is for SHARJAH, who gives the impression that he still has much more to offer. Melon’s best would of course entitle him to respect but he’s been absent since falling in April and while Supasundae seems sure to give his running it’d be a shade disappointing were there not one or two capable of improving past him.

New Mexico panel to decide on horse-racing track in December