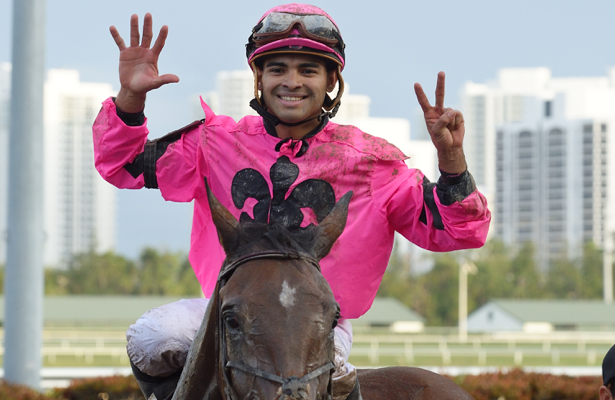 Veteran rider Luis Saez is closing on in his 2,000th career win. Going in to Friday’s card, the Panama City native was just six wins away from reaching the milestone.

“It’s pretty exciting. It’s tough competition to win races and a very tough meet here but getting close to 2,000 wins is big for me. It’s not easy,” Saez said.

Promises Fulfilled is on a three-race win streak heading into the Breeders’ Cup Sprint including scores in the Grade 3 Amsterdam, Grade 1 H. Allen Jerkens, presented by Runhappy, and the Grade 2 Phoenix.

“He’s been doing pretty good. He’s been racing very nice and hopefully he runs big in that race,” said Saez who is looking for his first Breeder’s Cup score. “It would be a dream for me to win a Breeders’ Cup. To win there would be special, it’s pretty tough just to win any race but a Breeders’ Cup would be very special.”

The Argentinian-bred Hi Happy, trained by Todd Pletcher, has posted a record of 2-1-2 from seven starts in 2018 including a prominent effort to win the Grade 1 Man o’ War. Hi Happy will be among the contenders in a loaded field assembled for the Breeders’ Cup Turf.

“I know him well. He’s a big horse and I like how he runs. He always tries, and I think he’s going to be alright in this race,” said Saez.

Saez has seven mounts slated for Saturday and five more on Sunday as he looks to capture his 2,000th win before the Belmont fall meet closes.

Racing Post - June 16, 2018
0
Riley Mott - son of trainer Bill - with the lowdown on Queen Anne Stakes contender Yoshida. Could this one emulate Tepin by...

Happy times at last for Exultant | The story of a...