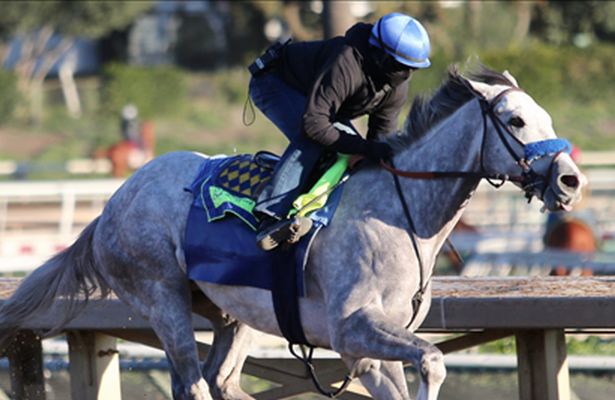 Coliseum, seemingly one in a plethora of Bob Baffert 2-year-olds about to embark on the Triple Crown trail, worked six furlongs under Joe Talamo Sunday morning in a bullet 1:12.40 for next Saturday’s Grade 3, $100,000 Sham Stakes.

The one mile race for 3-year-olds is the first stakes steppingstone on the West Coast to the Kentucky Derby on May 4, providing the winner with 10 qualifying points to the Run for the Roses, with four to the runner-up, two to the third-place finisher and one to the fourth.

“Coliseum showed a high cruising speed, nothing new there,” said Toby Turrell, publisher of the widely-respected selection sheet The Winners Card, which has been providing valuable information to horse players since 1988.

A gray son of Tapit owned by Godolphin LLC,
Coliseum was a smashing debut winner under Talamo at Del Mar Nov. 17, winning a seven furlong test by 6 ¾ lengths.

Two-time Triple Crown winner Baffert, meanwhile, will be seeking his sixth victory in 18 runnings of the Sham. He won the inaugural in 2001 with Wild and Wise; the 2006 edition with the late Bob and John; and has dominated the past four years, winning with Midnight Hawk in 2014, Collected in 2016 and McKinzie earlier this year.

Law Abidin Citizen makes his first start in two months Tuesday in the Grade 3 Joe Hernandez Stakes, and with streaking Breeders’ Cup Turf Sprint winner Stormy Liberal in the race at about 6 ½ furlongs on turf, it could be a daunting task.

“He’s a tough horse himself, but you’ve got Stormy Liberal to deal with, amongst others, so we’ll see what he can do.”

First post time Monday will be 12:30 p.m. PT for an eight-race card, while Tuesday, New Year’s Day, 10 races will be presented with first post time at noon PT. Tuesday also is Dollar Day, with beer and soda on sale for a buck apiece, and hot dogs at $2.

ROSARIO ‘BACK HOME’ AND ON TOP AT SANTA ANITA

With five victories through three racing days, Joel Rosario is riding regularly at Santa Anita, on top of the standings and likely to remain there for the duration.

The 33-year-old native of the Dominican Republic took a rare moment of inactivity at Clockers’ Corner Sunday morning to schmooze with old acquaintances.

“It feels like I’m back home, and I am back home,” said Rosario, who enjoyed much success in the Golden State before joining super-agent Ron Anderson in August of 2012 and making the East Coast his base of operations.

“It’s nice to be here with everybody I know from before,” Rosario said. “Ron is a very nice guy and a great agent, so I’m happy to be working with him.’

With a 10-race card on tap, Sunday’s fifth race will serve as leg one in the Rainbow Pick Six, with approximate “leg one” post time at 2 p.m. PT.

FINISH LINES: Bellafina worked five furlongs this morning in 1:00.80 for the Grade 2 Santa Ynez Stakes at seven furlongs this Sunday. “Perfect,” said trainer Simon Callaghan in summing up the drill for the daughter of Quality Road, a troubled fourth as the 19-10 favorite in the Breeders’ Cup Juvenile Fillies on Nov. 2.

Triple Crown prospect Instagrand, monster winner of his only two starts by a combined margin of more than 20 lengths, worked three furlongs for Jerry Hollendorfer in 38.80, while John Sadler sent stakes winners Selcourt and Catapult five furlongs and six furlongs, respectively in 1:00.60 and 1:14.60. In all, there were 196 recorded workouts this morning, including 38 on the training track.

Toby Turrell of Winners Card says Bob Baffert’s best 2-year-old turning 3 could be the once-beaten filly Chasing Yesterday. “She continues to get better by the day,” Turrell said of the chestnut daughter of Tapit owned and bred in Kentucky by Summer Wind Equine, winner of four of five starts including the Grade 1 Starlet at Los Alamitos on Dec. 8.

Horse with a very rude name on paper gets the go-ahead...

The weekend’s best bets by Charlie McCann of betvictor