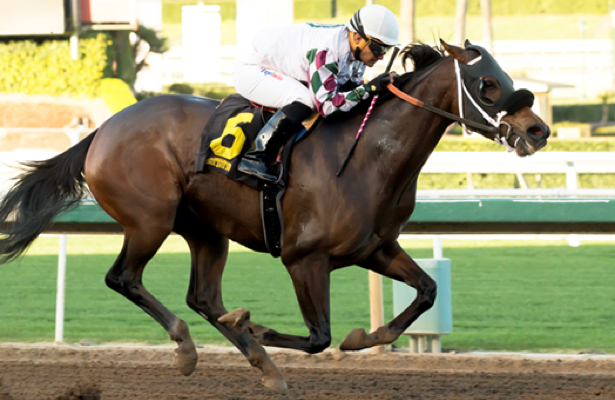 Lake Time seeks her first added money victory Sunday in the $75,000 Kalookan Queen Stakes for older fillies and mares at 6 ½ furlongs on the main track at Santa Anita Park.

The 5-year-old Tapizar mare, trained by Eric Kruljac for owners Mary and James Abel, will be running in her fourth stakes in 18 career outings.

“She’s training great,” said Kruljac, who ran her at Turf Paradise last Oct. 20 where she was third in a restricted stakes. “I sent her there mainly so my brother, Jay, and his associate, could help her, and they did.

“Jay works with crystals and he found some trouble spots in her spine and fixed them. They sent her back here and she ran a 93 Beyer winning an overnight race at Del Mar Nov. 16.”

Diaz, who carries a 10-pound weight allowance and tacks 106 pounds, is the son of veteran jockey Juan Carlos Diaz, Puerto Rico’s all-time leader in stakes victories and its champion rider the past 16 years. He began his career in 2000 and has compiled 4,772 victories with purse earnings of more than $40 million.

“I’m really excited to have young Diaz,” said Matos, who expects him to arrive at Santa Anita on Feb. 4 with his father, and to begin riding at The Great Race Place Feb. 7 with publication of the latest condition book.

En route from LAX to Santa Anita at press time, Steve Lym, Santa Anita’s newly appointed Vice President and Racing Secretary, is due to arrive at The Great Race Place later this morning.

Steeped in the Thoroughbred business from childhood, Lym served as Woodbine Racecourse’s Racing Secretary from 2003 through 2013 and as their Director of Racing from 2013 until this past fall.

Lym, who is married (Jennifer) and has two sons, Curtis, 20 and Jordan, 19, brings a wide breadth of industry experience to one of America’s most pivotal racing positions.

“Coming from Woodbine, where we too, are a bit isolated in terms of ready access to other major tracks, I see similarities in the business model that Santa Anita is faced with and I think I bring a skill set that will transfer nicely to Southern California,” said Lym upon his appointment on Dec. 22.

Lym will be assisted throughout his transition and beyond by current Santa Anita Racing Director Dan Eidson and TSG Vice President of Racing PJ Campo.

O’Keeffe on a roll with rising star Sam Spinner

Todays ITV Racing coverage – schedule and times for ITV, At...