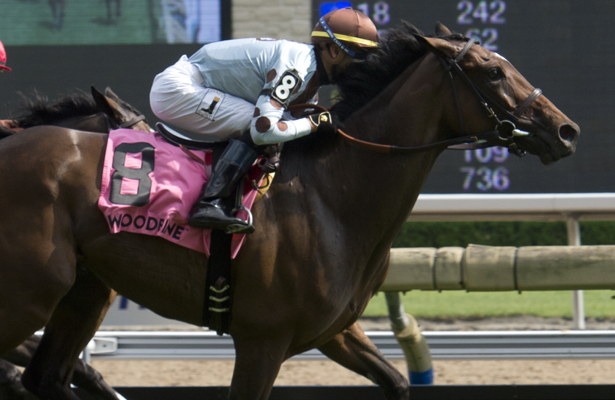 An impressive field of nine fillies and mares will go postward in the Grade 1, $500,000 E.P. Taylor Stakes, slated for Saturday on Pattison Canadian International day at Woodbine Racetrack.

Trainer Chad Brown will have three opportunities to win the E.P. Taylor, sending out a pair of Irish-breds in Elysea’s World and Pollara, along with British-bred Santa Monica.

A 5-year-old daughter of Mastercrafstman, Santa Monica made her first trip to Woodbine a successful venture when the bay mare took the Grade 2 Dance Smartly Stakes on June 30.

Owned by Mrs. John Magnier, Madaket Stables and Deron Pearson, she comes into the E.P. Taylor off a second in the Grade 2 Glen Falls Stakes, on September 1 at Saratoga.

Santa Monica will have Jose Ortiz, who teamed with Oscar Performance to win this year’s Ricoh Woodbine Mile, in the irons.

“She loves the distance and is in great hands with Chad Brown,” said Ortiz, who has won 1,655 career races as of October 9. “I’ve liked this filly from the first time I rode her at Keeneland, but I feel her best race to date was at Woodbine, so I’m excited to ride her in the E.P. Taylor. She loved the course last time she won here.”

Elysea’s World, a daughter of Champs Elysees, winner of the 2008 Northern Dancer Turf, 2009 Pattison Canadian International and Canada’s 2009 Horse of the Year, seeks her seventh career victory in her 22nd start.

The 5-year-old bay, who has won two races in a row coming into the E.P. Taylor, finished second in the Grade 2 Canadian Stakes in 2017.

After going winless in nine starts (four seconds and two thirds) last year, Elysea’s World has three wins and a third from five starts in 2018.

The Brown trio is completed by the lightly-raced Pollara, a 3-year-old daughter of Camelot, who has two wins from three lifetime starts.

Owned by Peter M. Brant and Allen Stable Inc., the filly will be looking for her second straight score after taking the Group 3 Prix du Royaumont at Chantilly this June. Pollara won the 1 1/2-mile feature by 1 1/4-lengths.

Proctor’s Ledge, a 4-year-old daughter of Ghostzapper, trained by Brendan Walsh for Patricia Moseley, brings some serious credentials into the E.P. Taylor.

The Kentucky-bred bay is a multiple graded stakes winner, her victories including the Grade 2 Distaff Turf Mile at Churchill this May.

On September 17, the bay was a one-length winner in the Group 3 La Coupe de Maisons-Laffitte, in what was her fifth career score from 13 starts.

The French-bred miss romped to an impressive 4 1/2-length triumph in the John Musker Stakes at Yarmouth, on September 19.

Andrea Atzeni, who will ride Desert Encounter in Saturday’s Grade 1 Pattison Canadian International, will once again be aboard the Roger Varian-trained 3-year-old filly.

Sky Full of Stars, who has four wins, two seconds and two thirds in 14 career races, will seek her second straight trip to the winner’s circle.

Trained by Henk Grewe, who will have Khan go postward in the Canadian International, Sky Full of Stars won the Group 2 T. von Zastrow Stutenpreis in efficient fashion on September 1, at Baden-Baden in Germany.

Bred and owned by Gestut Karlshof, the 4-year-old grey daughter of Kendargent has three wins from six starts on the campaign.

“She has a big heart,” praised Grewe. “And she fights like a lion.”

The formidable duo of Hall of Fame trainer Mark Casse and owner Gary Barber are represented by Summer Luck, a dark bay daughter of Lookin at Lucky.

Bred in Kentucky by Imperious Stable and Lookin at Lucky Syndicate, the 4-year-old has three wins, five seconds and four thirds from 18 career starts.

Starship Jubilee, an 11-time winner from 23 starts, will carry the hopes of Canada in the 1 1/4-mile event.

Trained and co-owned (Soli Mehta shares ownership) by Woodbine-based Kevin Attard, the 5-year-old daughter of Indy Wind motors into the E.P. Taylor off an impressive 3 1/4-length victory in the Grade 2 Canadian Stakes on September 15.

Sent on her way at 11-1, Starship Jubilee, with Luis Contreras in the saddle, was able to widen her one-length advantage at the stretch call to net the win.

It was the second consecutive triumph for the Florida-bred, who also won a 1 1/16-mile grass race at Woodbine on August 6.

“She’s obviously a very special horse to us because of what’s she’s done,” said Attard.  “A Sovereign champion (2017, Top Female Turf Horse), and to see her come from a claimer to a multiple graded stakes winner has been special to see. Not a big filly, but she’s tackled some of the top turf fillies in North America and this weekend will have her biggest test to date.

“We feel very privileged and honoured to be competing in a race of this magnitude. Some great fillies and mares have competed in the E.P. Taylor and gone on to be successful broodmares.”

The E.P. Taylor Stakes is scheduled as the 10th of 11 races on Saturday’s 1 p.m. program, following the 81st running of the $800,000 Pattison Canadian International.

Here is a look at the complete field in post position order:

Royal Ascot 2018 dress code: what to wear to the races