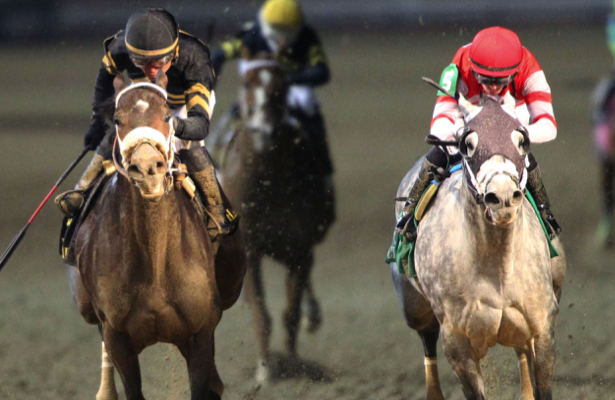 Defending Clark Handicap (G1) winner Seeking the Soul looked ready to fire at the top of the stretch Friday, but he faced a three-wide wall of horses battling for the lead. By the time he had room to run, the 5-year-old’s rally sputtered, and he finished third behind Leofric and Bravazo.

“He just gave kind of an even effort,” said jockey John Velazquez. “I split horses around the quarter pole but he just kind of flattened out.”

“Stuff happens,” added Bo Chapman, assistant to trainer Dallas Stewart, on Saturday morning. “He got into a little bit of trouble, but he came out of the race good, so that’s the important part.”

As for Bravazo, only a neck behind at the wire, “He’s good,” said Sebastian “Bas” Nicholl, trainer D. Wayne Lukas’ longtime assistant. Lukas said entering Friday’s race that Bravazo, a Calumet Farm homebred who competed in all three legs of the Triple Crown series, will run at age 4.

“Let’s get this one under our belt and move on to next year,” Lukas had said. “…He shows up every single time we run him.”

“I’m so proud of his effort,” jockey Joel Rosario said after Friday’s race. “He ran really hard today. We had a great trip just off of the pace and I tipped him toward the outside around the three-eighths pole and he started to pick off horses. He tried the entire way down the lane and we almost got the job done.”

editor - December 16, 2018
0
CHAMPIONSHIP Horse Racing has handpicked eight top racecourses to host next summer's 'The Series' in a bid to shake up racing.  The bold idea...

Reed: Marriage Of Horseracing And Bourbon In Kentucky And At The...