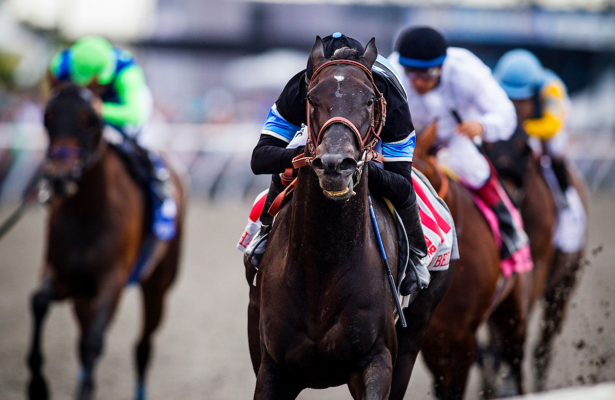 Trainer Murat Sancal has put 15 workouts into the full brother of the late Shared Belief with the goal of getting him to the races in November. But the question remains: Where?

Sancal said the 2-year-old colt, Shared Legacy, could run at Churchill Downs where he is now based, but that “big trainers” from the West Coast — it’s too soon for him to disclose who — have been in contact.

“I want the best thing for the horse,” Sancal said. “Who knows? We may have some partnership, and the horse may go to California.”

Sancal, who works with owner Arif Kurtel, said that sometime in October connections will know where to expect Shared Legacy’s debut.

Shared Legacy, then known as Hip 153, did not meet his reserve price at the 2017 Keeneland September Yearling Sale, hammering for $1.9 million. Kurtel also reportedly spurned a $1.7 million offer for private purchase.

Sancal said it’s unlikely the Turkish businessman parts with Shared Legacy, one of his 1,300 or so horses.

“There’s always been an interest,” the trainer said. “The horse looks good and is training nice. If he’s any good at the races, he’ll probably be a good stallion prospect.”

As with Shared Belief, Shared Legacy is a son of Candy Ride out of the Storm Cat mare Common Hope. Kurtel purchased Common Hope in foal for $125,000 back in 2011 — before Shared Belief won five Grade 1 races and earned nearly $3 million.

A gelding, Shared Belief died in 2015 after a bout of colic. Shared Legacy is a colt.

“That filly, a chestnut, is definitely a different kind of horse,” Sancal said of the connection to Shared Belief.

As for Shared Legacy, “He’s a very solid horse,” Sancal added. “He has no problems at all. We’re just taking our time with him. He’s very smart — good conformation. I feel like he’s going to be special, just like his brother. We’re not pushing him to be ready.”

Who will land November’s Stobart Jockey Of The Month award? Paddy...

editor - December 5, 2018
0
IT'S time to vote for November's Stobart Jockey Of The Month! Paddy Brennan, Harry Skelton and Daryl Jacob are the final three and hoping to...

Saturday’s ITV Racing coverage – schedule and times for ITV and...

No Champ: Henderson opts to run Birchdale in Ballymore trial |...

All Too Huiying races to Sandown victory

Horse by horse guide to the Caspian Caviar Gold Cup at...