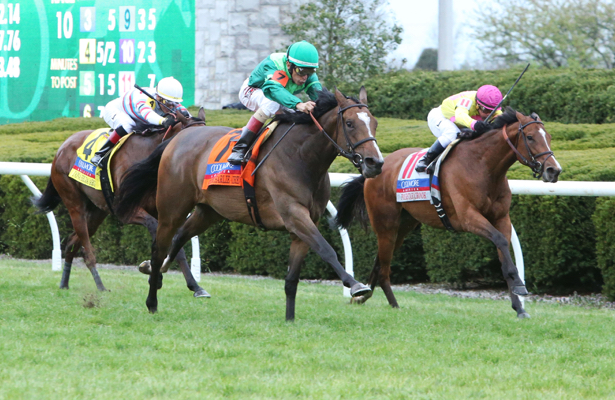 In a trio of American graded stakes starts entering Saturday, Chad Brown-trained Sistercharlie had either won or just missed while coming from far back. The drama continued in Saratoga’s Grade 1, $500,000 Diana Stakes when the 4-year-old mare got up in the final stride to nip Ultra Brat.

More forward placement under jockey John Velazquez proved key in a photo finish at Saratoga, as the Hall of Famer advanced his mount from second last to midpack going into the turn, then gobbled up ground running wide in the stretch.

“I had my doubts,” trainer Chad Brown admitted.

Sistercharlie appeared to lose the bob at the wire, but still had a nose in front of her rival. The final time for 1 1/8 miles on turf was 1:46.26, with Sistercharlie off at even money.

The daughter of Myboycharlie was one of three trained by Brown in the field of seven, with his next-best finisher A Raving Beauty in third despite that one having to steady along the rail in the turn.

Bred in Ireland, Sistercharlie raced in France before making her stateside debut a year ago in the Belmont Oaks. She won Keeneland’s Jenny Wiley to open this season, then was defeated by only a head in Belmont’s New York Stakes back on June 8.

Velazquez said advancing earlier would be of importance in the Diana, and it proved true.

“She gives you whatever she can,” Velazquez said, “and she does enough to get there, then kind of hangs a little bit.”

Brown has now won the Diana three straight years, also taking it in 2016 with Dacita and 2017 with Lady Eli.

BANG another close finish as Sistercharlie catches Ultra Brat at the wire in the Diana pic.twitter.com/30CIW0Pxew

When, where 2019 Kentucky Derby contenders should emerge