Dubai can provoke myriad responses, not all of them completely positive. Critics suggest the emirate is a monument to ostentation, bold and brash, a veritable Las Vegas in the desert. Everything is bigger there, from the world’s tallest building, the needlepoint Burj Khalifa, to the Dubai Mall, the world’s largest shopping mall by capacity. Even the sharks in the splendid Dubai Aquarium appear outsized, larger than life, as if Mahmood Al Zarooni has got a new job overseeing the fishy feeding regime.

Meydan exists as a microcosm of Dubai, constructed at great cost (an estimated $2 billion) and unfinished: the proposed Meydan City development – supposedly to feature business district, canal district, marina and housing – stalled amid the last decade’s financial turmoil. Yet take a trip to Meydan on Dubai World Cup night and cynical preconceptions are soon undermined, for this is an experience unlike anywhere else in the racing world.

Frankly, the place is staggering. Size matters in Dubai and first impressions can only be commandeered by the sheer gobsmacking magnitude of the mammoth ten-storey grandstand, housing a hotel and Imax cinema. This is a once-seen-neverforgotten behemoth, shown to best effect after dark, when the distinctive crescent-shaped roof that rests atop this iconic building stands illuminated beneath the desert night sky. It would be hard to envisage a more atmospheric venue. 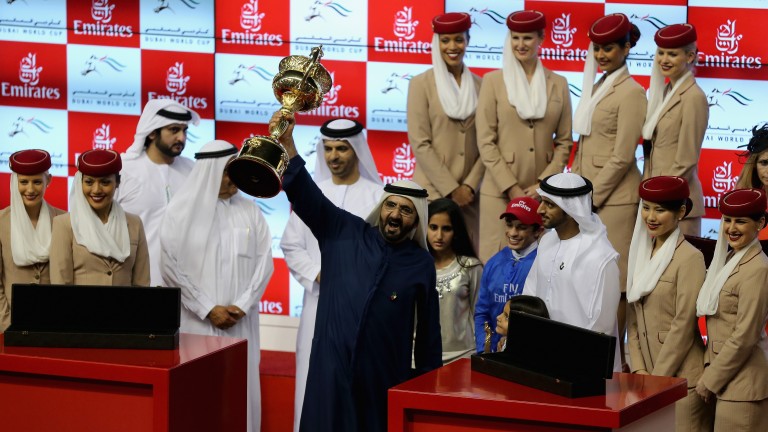 Although Meydan has been described as space-age, that compound adjective is an anachronism born of the 1960s. The old corrugated-metal tube grandstand at Nad Al Sheba could have been called space-age; this is more futuristic, ‘ahead of the curve’ rather than ‘state of the art’.

“It is an extraordinary place, an absolutely stunning piece of architecture,” agrees Newmarket trainer David Simcock, a regular at the Dubai Carnival. “It is fantastic to see it full up with people. The only sad thing is that it happens like that just once a year, but things are still happening. They are still building, although perhaps it’s not the same model as when they started.”

‘Meydan’ is arabic for ‘a place where people congregate’ and more than 60,000 will populate the grandstand on World Cup night plus a post-race concert, that much-maligned species so disdained by regular racegoers in Britain. Except in Britain you might get Nik Kershaw, Bananarama or the Dooleys if you’re lucky; the glitz-and-glamour quotient tends to be a bit higher in Dubai, where Jennifer Lopez has been flown in to do the honours. Mind you, a serious promotional opportunity appears to have been missed here: where are the posters promising Sheikh Mo meets J-Lo? The Dubai World Cup card represents the culmination of the UAE season and other meetings at Meydan tend to be less well patronised, an overwhelming facility usually attracting a fairly underwhelming audience. Not today, though, when horseracing offers an important date on the Dubai social calendar.

Located just south of Ras Al Khor wildlife sanctuary in the desert, Meydan is easy to get to, just a couple of miles away from the metropolis and clearly signposted from Sheikh Zayed Road, Dubai’s central thoroughfare, and the Al Ain/Hatta intersection. Shuttle buses are available to various Dubai destinations and there is a taxi pick-up point outside Gate B. Gates open at 2pm, two and a half hours before the first. J-Lo will warble her last more than ten hours later; it ain’t over till the hispanic lady sings.

Racegoers have plenty of options for entry, starting with general admission at just AED25 (about £4) and AED100 (£16) for the Parade Ring Lounge. At the other end of the scale, gourmands can go upmarket for any number of tailored hospitality packages in private suites and high-class restaurants like The Tier on Level 3, which offers a fantastic view over the paddock and final furlong, and a cellist. Go higher to Level 7 and you’ll enter the Sky Bubble, where the vantage points are even more impressive.

A colleague suggests that Meydan is perhaps just too big but from the fifth-floor vantage point of the media centre it feels more manageable – and undeniably impressive, the stand stretching down the five-furlong chute just before the sound stage where J-Lo will soon be assuring us all that, despite appearances to the contrary, she remains “Jenny from the block”.

The Meydan hotel curves around what would be deemed the clubhouse turn in the States; down below the dark asphalt grey of the controversial Tapeta inner track looks almost blackset within the bright green turf. Visible in the distance beyond the backstretch, minarets and mobile-phone masts neatly illustrate the twin sides of Dubai. At about 3pm, as the sounds of Paul Weller singing You Do Something To Me are blasted out across the PA, there is a distinct air of calm before the storm. A swelteringly hot calm, that is.

Inside the colossal stand, the scene is almost anonymous, somewhere between the carpeted hallways of a business hotel and a shopping mall. It is easy to get bamboozled here by the endless walkways, escalators and signposts. The view from the rear, however, is stupendous: behind the car park-like saddling area, just beyond a short expanse of desert, sits a glorious view of the Dubai skyline. 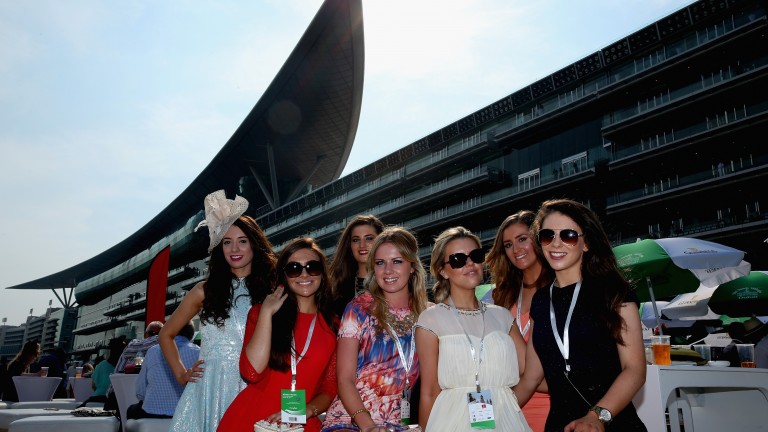 Racegoers enjoy the action at Meydan

Not that such matters are occupying the thoughts of many of those downstairs on the ground floor, where one thing – well, several things – are notable for their absence. There are no betting windows, gambling still being prohibited in Dubai, the most tolerant of Islamic states. Mind you, that’s not to say the locals aren’t studying the form: quite the opposite, in fact, as the free-to-enter Pick 6 and Tricast ‘prediction games’ are wildly popular. As well they might be, as the prize fund goes up to AED70,000 (£11,500).

Crouching down on patches of grass in the no-alcohol general admission enclosures just beyond the parade ring, locals in dishdashes (or polo shirts and jeans) huddle around form pages before filling in vouchers that could not look more like tote tickets if they were, er, tote tickets. As the evening progresses, discarded pages of form from the arabic section of the local Al-Adiyat racing magazine will litter the floor. Punters are clearly a similar breed from Dubai to Doncaster.

A kind of voluntary segregation prevails in front of the stands, where expats are rammed into various designated drinking areas. There may be no betting, but there is plenty of boozing in the Irish Village and Le Lounge, where only champagne and mineral water is on offer to patrons reclining on white leather sofas. Inside, as a powerful sound system belts out dance music beneath Exits B and C, racegoers can choose from several food-and-drink concessions, like Caviar Classic seafood and the Good Fellas Sports Lounge.

A well-dressed jacket-and-tie crowd populates these parts of the track and, while they cannot possibly see much of the horses live, it would not be accurate to suggest they aren’t interested: during races, rapt attention is paid to the five-panel horizontal screen on the other side of the track. And gambling? Well, let’s just say more than one iPad displaying racecards and mobile phones seems to go into overdrive just before the off. 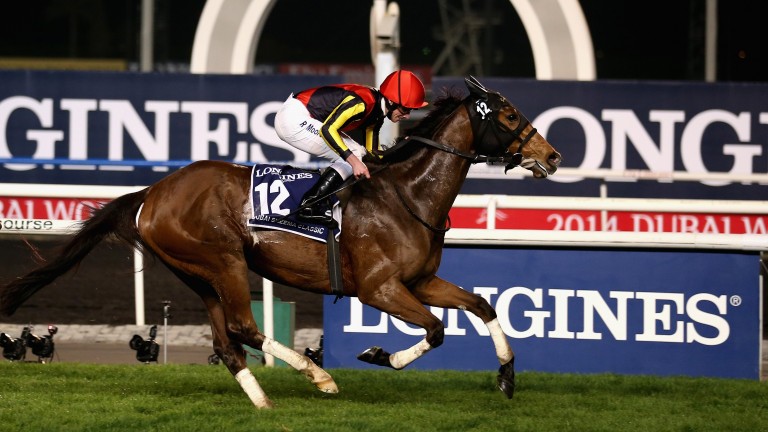 Backed by such a stupendous setting, the racing has a lot to live up to and, for the most part, it succeeds. An unusually agricultural Oliver Peslier displays a rare absence of French elegance as he coshes his mount up the rail in the opening arab race. Is it just me, or do they always look like toy horses? Pretty but miniature, and pretty slow. Everything seems to take longer than it should.

The multinational nature of this most cosmopolitan of meetings is amply demonstrated by the first five thoroughbred races, won by horses from South Africa, Ireland, England and Hong Kong (twice). Dual South African horse of the year Variety Club makes all in the Godolphin Mile for Joey Ramsden – watch for the horse in Europe after a transfer to the De Kock team – before the Mick Halford-trained Certerach holds on from Cavalryman in a rough race for the two-miler. “He was unlucky,” says Silvestre de Sousa, Cavalryman’s jockey. “The other horse came across us 200 yards out and it cost us the race.”

But when is an objection not an objection? When Sheikh Mohammed tells you to withdraw it, as De Sousa soon finds out. “Silvestre objected but Sheikh Mohammed decided the objection should be withdrawn as he didn’t want to win a race like that,” explains Darley bloodstock adviser John Ferguson.

Can’t resist a funny here, I’m afraid, after Simcock’s Sheikhzayedroad meets traffic problems, while Emirates Flyer is delayed and can finish only third in the UAE Derby, which produces the result of the night from a British perspective as Toast Of New York romps home for a victory honed in the jumping field. The image of trainer Jamie Osborne hugging his assistant Jimmy McCarthy after an unlikely triumph will linger long in the memory.

Scarlet light bathes the stand as a specially commissioned movie fills the big screen to the unlikely strains of Nirvana’s Lithium played on flute backed by full orchestra.

Presumably someone like Sheikh Mohammed then says “Let there be light” as the bank of floodlights come back up and it is time for Japan’s Just A Way to demolish his rivals in the Dubai Duty Free before compatriot Gentildonna benefits from the Ryan Moore treatment in the Sheema Classic.

They say the Derby winner doesn’t like the Tapeta surface, and neither do Military Attack (dread to think what he was named for but at least he’s not owned by a North Korean) or dirt star Ron The Greek (who used to be American but is now Saudi Arabian). On the other hand African Story (was French, now Dubaian), never before even placed at Group 1 level, loves the surface and if his victory over the courageous Mukhadram offers a shade of anticlimax, there is nothing lacklustre about the postrace celebrations as pandemonium ensues for a Godolphin home win.

Still, you can’t help thinking that yet another dubious winner of the $10m contest might signal the death knell for its synthetic surface. A superb event requires a superlative race as its raison d’etre, and sometimes it doesn’t seem to be getting one these days.

Otherwise, though, for once you can believe the hype. Meydan truly is magnificent.

Nicholas Godfrey’s new book, Postcards from the World of Horse Racing, is available at racingpost.com/shop

what time is the horse racing on ITV4 this Wednesday, December...

Navan cancelled but Thurles likely to go ahead on Thursday |...

Push underway to bring Greyhound and Horse Racing back to Kansas

Horse Racing Betting Tips: O’Meara ready to Out Do himself at...

The Kentucky Derby’s 1933 ‘Fighting Finish’ and other early races