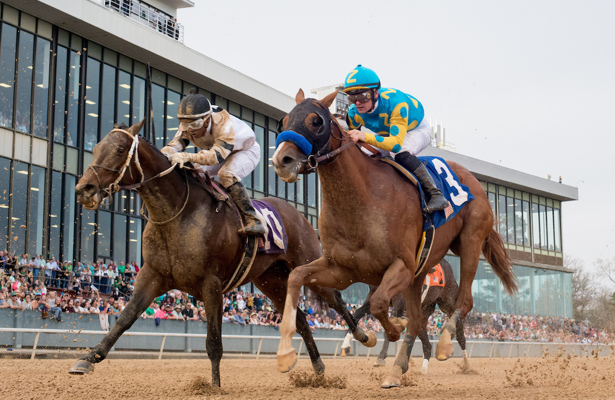 With Justify training toward the 2018 Belmont Stakes at Churchill Downs, a number of his high-profile Bob Baffert stablemates have also remained on the grounds in Louisville since Kentucky Derby weekend.

Two of them — Derby runner Solomini, and Rayya out of the Kentucky Oaks — are set to go in a pair of allowance optional claiming events later this week.

The Hall of Fame trainer Baffert entered Rayya in Friday’s fifth race, cutting her back in distance to seven furlongs. The Group 3 winner at Meydan was second to Mendelssohn (granted, by 18 1/2 lengths) before missing the break in the Oaks, finishing 13th. She’ll go against fellow Oaks runners Classy Act and Kelly’s Humor in this spot. Post time is 2:45 p.m. ET.

Solomini, who hasn’t won aside from his maiden thanks to a controversial disqualification in the Grade 1 Los Alamitos Futurity, received some needed class relief. But he’ll be up against it in Saturday’s ninth race having drawn the No. 10 post in a field of 12 3-year-olds going 1 1/16 miles. Also in are Tiz Mischief and Mississippi, two names familiar to those who followed the Derby trail. Post time is 10:11 p.m. ET on a “Downs After Dark” card.

Baffert’s barn at Churchill Downs includes West Coast, who is “just walking,” with no start impending out of his Dubai World Cup runner-up effort, and Ax Man, who won Pimlico’s Sir Barton Stakes in impressive fashion. Jimmy Barnes, assistant to Baffert, said the Grade 3 Matt Winn on the upcoming Stephen Foster Handicap undercard is a possibility for Ax Man.

Racing Post - March 5, 2018
0
Henry Hardwicke has returned to his natural habitat in search of some Cheltenham fever

Axelrod under consideration for 2018 Travers Stakes