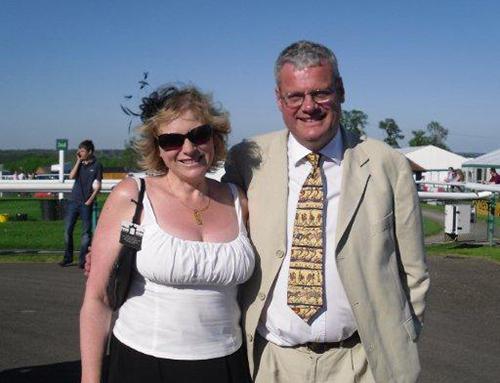 Dickin’s horses have been in form of late, a point re-enforced by the 16/1 success of Vocaliser at Leicester a fortnight ago, and he may run The Lion Man and Young Lou in the 3m hurdle, the fifth renewal of the Caroline Beesley Handicap Hurdle, in memory of the former BBC Radio Northampton journalist and broadcaster pictured above with Mark Beesley in 2012

NATIONAL Hunt enthusiasts seeking inspiration on Thursday’s card (21st December 2017) at Towcester could easily do much worse than trail a Christmas Robin.

Warwickshire trainer Robin Dickin has been Towcester’s most regular patron over the last 25 years and is promising to cross the border into Northamptonshire with a sackful of runners.

“We look like having at least five runners at Towcester,” said Dickin, successful at the last meeting with jockey Jack Quinlan on board Some Finish, an eight year-old Kayf Tara gelding which also won at Towcester over fences in April.

“When we have had a quiet spell it has always been a case of ‘Towcester to the rescue’ as we have always had winners there,” reflected Dickin. “Since they introduced dog racing and cut the number of horse racing fixtures I have often said I should sue for loss of earnings!”

Turning his attention to Some Finish he said: “The horse is six pounds higher in the handicap but won by a length and three-quarters and does love it there. There is no reason to suppose he won’t go close again.”

Some Finish is entered in the totepool Merry Christmas Handicap Chase over 2m 4f, the second contest on the card at 12.55 where the danger could be dual course winner Ballyegan from the Bob Buckler yard, although this horse is now approaching the veteran stage at 12.

Dickin’s horses have been in form of late, a point re-enforced by the 16/1 success of Vocaliser at Leicester a fortnight ago, and he may run The Lion Man and Young Lou in the 3m hurdle, the fifth renewal of the Caroline Beesley Handicap Hurdle, in memory of the former BBC Radio Northampton journalist and broadcaster.

Dickin said: “Young Lou won’t mind soft ground and I imagine that’s what the going will be like. She has suffered a bit from running consistently which means she is not far off away from being badly handicapped.”

Young Lou has only managed one career victory but was second of 17 to Kelsey back in February 2016. Dickin said: “Young Lou’s owner Cliff Beech is 92 and worked in the steel industry. His company was famous for testing the chain and anchor which went on board the Titanic at Liverpool on its maiden and tragically final voyage.

Meanwhile, Dickin believes The Lion Man wants better ground but said: “He would have been placed at Ludlow in November only to clip the top bar and come down at the last.”

That fall left jockey Tabitha Worsley with a broken vertebrae in her back although it is hoped she will be able to race ride again next season.

Dickin also has Oneida Tribe entered to run in the 2m 5 1/2f novices’ limited handicap chase and this eight year-old will sport the colours of Banbury concern John Nicholls Trading. A new recruit will be Belle’s Spirit in the concluding bumper.

Report this article as inappropriate

You need to log in before you can do that! It’s only a quick registration process to join the AMA network and completely free.

Racing Post - December 2, 2018
0
We visit the legendary Monet's Garden, now aged 16 and enjoying his retirement at the yard of Nicky Richards in Greystoke, Cumbria.