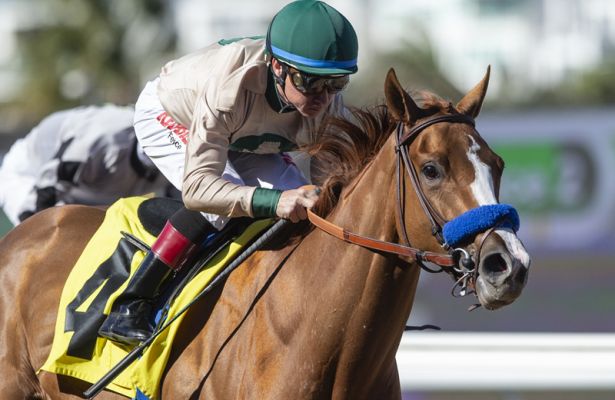 When Chasing Yesterday went from a maiden win in California to New York’s Spinaway Stakes (G1), the task appeared to be too much, too soon. Since then, however, the half-sister of Triple Crown winner American Pharoah has reeled off back-to-back wins.

And so the daughter of Tapit, out of the mare Littleprincessemma, will return to the top level for Saturday’s Grade 1, $300,000 Starlet Stakes at Los Alamitos, where qualifying points toward the 2019 Kentucky Oaks will be offered on a 10-4-2-1 basis to the Top 4 finishers.

As with many West Coast stakes, a compact but talented field is expected, and Chasing Yesterday’s top rival likely comes from her own barn in Mother Mother, who won Churchill Downs’ Rags to Riches Stakes in her previous start.

Both Bob Baffert trainees will be joined by, among others, Vibrance, who was third by six lengths to Jaywalk in the Breeders’ Cup Juvenile Fillies.

Featured on that same Saturday card will be the Grade 1, $300,000 Los Alamitos Futurity for the boys. Baffert has a similar lineup with Improbable exiting the Street Sense Stakes win at Churchill Downs and Mucho Gusto a last-out Grade 3 winner in California.

This race — a 2019 Kentucky Derby qualifier — is a microcosm of the California circuit’s 2-year-old crop. It’s Baffert, trainer Jerry Hollendorfer and the rest. Hollendorfer could run back a pair from the Breeders’ Cup Juvenile in Gunmetal Gray (fifth) and Dueling (sixth).

This isn’t necessarily the “A” team for either trainer. Baffert also conditions likely champion Game Winner, while Hollendorfer’s Instagrand, unbeaten and untested, is back in light training as well.

Staying up late Saturday? Going into early Sunday, the Hong Kong International Races run at Sha Tin have attracted some of the world’s best on turf. The series will be without an American-based runner, but a number of familiar names from the Breeders’ Cup and other top grass stakes in North America are set to go.

Here’s an early look at the four Group 1 fields: