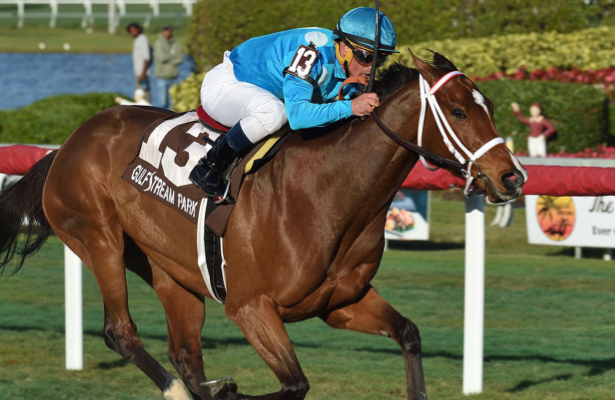 Thirteen proved to be a lucky number for Blue Heaven Farm’s Starship Jubilee, as the multiple Grade 2 winner overcame the far outside post to overpower 12 rivals and defend her 2018 victory in Saturday’s $150,000 Sunshine Millions Filly & Mare Turf at Gulfstream Park.

Beaten as the favorite from Post 12 in her previous start, the Claiming Crown Tiara Dec. 1 at Gulfstream, Starship Jubilee ($4.20) put away main challenger Picara at the head of the stretch and drew off to win by 4 ½ lengths under Hall of Fame jockey Javier Castellano. The winning time was 1:43.33 over a firm turf course.

“She hasn’t been lucky with the post positions, that’s for sure, but she had trained really well heading into this race,” winning trainer Kevin Attard said. “She had some excuses in her last race. I don’t think we saw the best of Starship Jubilee that particular day.

“Javier rode her really well. Obviously, coming out of the 13 hole you’ve got to use them up a little bit, but he managed to kind of get her settled down and tried to tuck in as best as possible,” he added. “The pace seemed like it kind of came back to a crawl early, but she ran well.”


Madame Uno, sent off at 30-1 from Post 12, was quickest from the gate and established the early lead, going the opening quarter-mile in 24.81 seconds and the half in 48.68, pressed by Picara, winner of the Sunshine Millions Filly & Mare Turf Preview Nov. 10 at Gulfstream Park West in her previous start.

Castellano kept Starship Jubilee in the clear three wide down the backstretch, looming a threat in third. Hall of Famer John Velazquez moved to challenge the leader around the far turn after six furlongs in 1:12.63 with Starship Jubilee glued to his outside, and they straightened for home together.

“I was very concerned about the post,” Castellano said. “I had to come out running and use her a little bit, and then nobody wanted to go to the lead. It was a difficult decision to make. I let two or three horses go and got her covered up a little bit. The trainer told me before the race, the best thing for her is to be covered up a little bit and let her make one run. That’s what I did and she finished up strong.”

Once in the stretch, Castellano set Starship Jubilee down for a drive and the even-money opened up on the field for her 12th career win and first in the second start since being purchased privately from Attard and Soli Mehta by Bonnie Baskin of Blue Heaven last November.

“It’s just nice to see her kind of run to her potential,” Attard said. “Obviously, she’s run against horses in graded, open company so when you see them in a restricted race it almost feels like there’s more pressure on you. I was just happy to see her perform as she did and win for the new connections, as well.”

Bitacora got up to be second, a neck ahead of Mrs. Ramona G. They were followed by Shanghai Starlet, Southern Sis, Picara, Thinkin Cowtown, Treasure for Gold, Weekend Mischief, Florida Fuego, Madame Uno, Surprise Wedding and Warranty.

Starship Jubilee has won nine times, including victories in the 2017 Nassau (G2) and Dance Smartly (G2) and 2018 Canadian (G2) at Woodbine, in 17 starts since being claimed for $16,000 in February 2017 at Gulfstream by Attard’s father, Tino, on behalf of his son. The 6-year-old Indy Wind mare won the Sovereign Award as Canada’s champion turf female in 2017 now owns eight career wins over the Gulfstream turf.

“I think we’ll probably give her a little bit of a break and then gear her up toward Woodbine,” Kevin Attard said, “but we’ll discuss it with the owners and take it from there.”

Reluctant partners will ride to the rescue of British pool betting...

editor - September 21, 2018
0
An agreement is expected to be finalised as early as next week which will see the two businesses which plan to operate pool...

Bryony Frost on riding a winner at the Cheltenham Festival