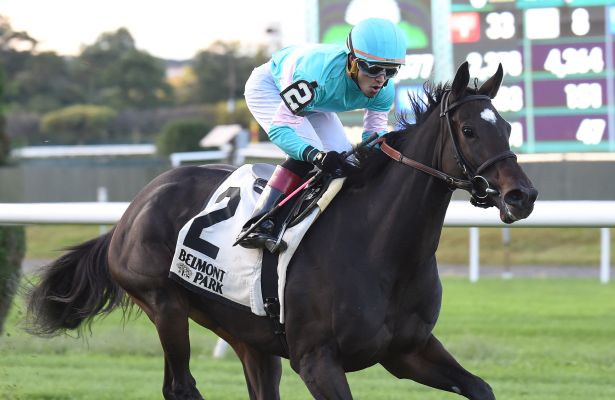 
Owned by Madaket Stables, Michael Dubb,
Kent Speillman and Bethlehem Stables, Stella Di Camelot (IRE) entered Brown’s barn from France following a third-place finish in the
Premio Regina Elena (G3) in Italy on April 29 and an allowance victory in France on May 22.


When Stella di Camelot arrived to barn, the daughter of Camelot was victorious by 2 ¾ lengths in the $200,000 Pebbles Stakes at Belmont Park over “soft” turf. One of Brown’s go-to riders,
Joel Rosario, has the mount in the Mrs. Revere and will break from post position No. 10.


The filly by Paynter is 4-for-9 lifetime including narrow wins in Monmouth Park’s Open Mind and Boiling Spring. The Kentucky-bred was most recently fourth behind fellow Mrs. Revere competitor
Princess Warrior in the Pucker Up (G3) at Arlington Park.


Trevor McCarthy has the call on Dark Artist and breaks from post 12.


Among the other entrants in the Mrs. Revere are the second and third place finishers in
Keeneland’s Valley View (G3), Get Explicit and Cool Beans, respectively.

Get Explicit, owned by
Modeste Racing Stable and trained by Canadian-based
Barbara Minshall, finished a half-length behind Colonia (FR) in the Valley View at odds of 70-1. The three-time winner, who is in search of her first stakes win, gets the riding services of
Ricardo Santana Jr. from post 8.

Cool Beans, trained by Louisville-based Brad Cox, has not finished off the board in all seven starts with a record of 2-3-2 and $161,150 in purse earnings. The filly by Candy Ride (ARG) finished second in the
Hatoof Stakes at Arlington Park in July prior to a three-quarters of a length victory in a first-level allowance race at Saratoga.


Regular pilot Florent Geroux has the call and drew post 5.

Another locally-based horse entered in the Mrs. Revere is Glencrest Farm and
Hold Your Horses, Inc.’s lightly-raced Angel of Mischief for first-year trainer
Norm Casse. The Into Mischief filly will look for her third win in a row after a 1 ¾-length victory at Kentucky Downs to break her maiden and a 1 ¾-length score in a first-level allowance at
Keeneland.


Jockey Tyler Gaffalione has the mount and will break from post 3.


All jockeys are assigned 118 pounds.


The race is named as a tribute to the highly competitive filly Mrs. Revere, who collected a total of four Churchill Downs stakes during a two-year local reign from 1984-85. Mrs. Revere collected three of those stakes during her 3-year-old season, thus providing
the appropriate name for this stakes for 3-year-old fillies on the turf. Mrs. Revere was owned by the partnership of
Dr. Hiram Polk and Dr. David Richardson.