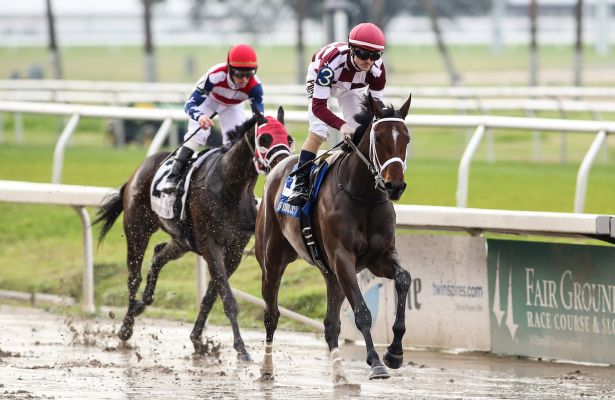 Farrell has won seven of 15 career races, and she’s 5-for-8 hitting the board at Churchill Downs. But Mike Shutty, author of Horse Racing Nation’s Super Screener handicapping system, won’t be betting the 3-1 shot in Churchill Downs’ Fleur De Lis Handicap.

Inspiration for the Super Screener Stakes Weekly analysis — which also covers the Stephen Foster (G1), Wise Dan (G2) and Regret (G3) on the “Downs After Dark” card — came from our loyal Triple Crown and Breeders’ Cup Super customers. They have often asked us for a product focused on analyzing the key graded stakes that run each weekend throughout the year.

What’s offered here for free is only a small sample of the full product available. Now, to more on the Fleur De Lis…

Farrell
finished second behind a game winner in Salty last out in the Grade 1 La Troienne on Kentucky Oaks day. Despite
getting the lone lead and setting the pedestrian pace, she was out-sprinted in the end. Here, she’ll get all kinds of pressure in the
form of a “need-to-lead” type, Apologynotaccepted, that projects to duel with Farrell. In addition, Farrell will need to negotiate more
ground, so a win here is unlikely. But don’t leave her off the board, as she is a gritty sort and has a good record on this
surface.

Blue Prize is the Super Screener Top Win and Top Board Hitter pick. She’s a reliable sort that has never missed the Trifecta
in six starts and she is 3-for-3 in the Exacta at Churchill Downs running against similar competition. She dueled through energy-depleting hot
fractions last out but was game enough to hold on for second while the rest of the front runners were nowhere to be found. She gets back on a preferred fast track and will press more reasonable and comfortable fractions leaving plenty in the tank for that
stretch run and she gets first run on closers. She makes for that perfect “key” horse to use in first and second in wagers.

Mopotism is one of a couple of horses here that will offer some value. Not the strongest win candidate here (though there is
a slight chance her best could pull that off) but she is a solid “under” player at a price due to the fact that she’ll secure an ideal
mid-pack trip behind all the speed and she meets easier than she has in her last three races. She’s better going shorter, but 1 1/8
miles is not completely out of her zone.

Awestruck has been on fire against easier as of late in one-turn events and now will face tougher while going two-turns and
another 1/8 of a mile. Tall order, but she is bred to handle the added ground and she possesses one of the best form cycle
patterns in this race.

So those are the top picks. But the Super Screener also features a full-field analysis, wagering strategies and who to use if you’re playing multi-race wagers. To get this week’s edition…

Butler to saddle final runners at Chelmsford on Thursday before three-month...