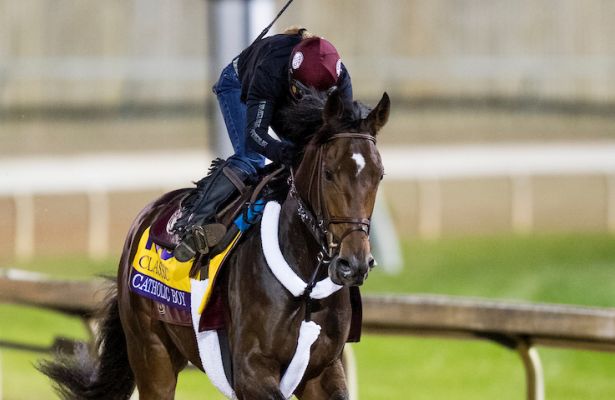 Catholic Boy, the Grade 1 winner over dirt and turf at age 3, will return to race next year as an older horse, trainer Jonathan Thomas announced Sunday morning after the colt ran 13th of 14 in the Breeders’ Cup Classic.

“See you next year as the journey continues,” Thomas tweeted. “Couldn’t be more excited and honored to have to opportunity to work with this incredible athlete and group of owners in 2019.”

A son of More Than Ready, Catholic Boy appeared to lose all chance when bumped leaving the gate and shuffled back into the pack. Before the Classic, he won the Belmont Derby Invitational (G1) on turf and Travers Stakes (G1) on dirt in succession.

Thomas told the Daily Racing Form’s David Grening that Catholic Boy is likely to run on both surfaces in 2019.

“I think he has a great chance of being a very, very good horse next year,” Thomas told DRF.

Catholic Boy is campaigned in partnership by Robert LaPenta, Madaket Stables, Siena Farm and Twin Creeks Racing Stables. He will receive a freshening and point to major races next year in New York, where Thomas is based after the winter in Florida.

Expensive purchase Willie John won’t be rushed up in class by...

editor - August 13, 2018
0
TRAINER Roger Varian will not rush Willie John up in class despite his eyecatching return at Doncaster. The premium 1.9 million purchase is unbeaten...

what time is the horse racing on ITV4 this Saturday?

Weekend Hideaway leads throughout in John Morrissey at Saratoga

First woman to run Townsville Turf Club in 150 years has...