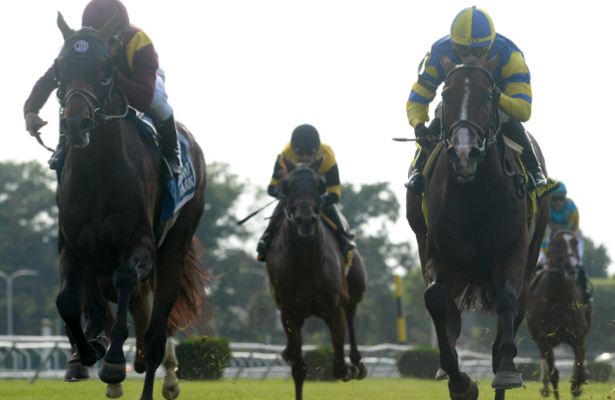 Justify is not the only colt from the 3-year-old crop capable of accomplishing very big things. Evidence of that should begin to show Saturday when a talented field of young grass runners enters the starting gate for the Grade 1, $1.2 million Belmont Derby Invitational.

Often an afterthought in America, turf racing has received a shot in the arm in recent years by this 10-furlong race, as well as the Belmont Oaks, which is also an integral part of the big Stars & Stripes card at Belmont Park. As grass becomes a more popular surface again for U.S. breeders and owners, suddenly we have some of our most talented runners not afraid to make turf racing a priority. And this year, we have some sophomore colts who just might have the talent to compete with any runner in the world.

“He went great, so he’s on target for the Derby.” So said America’s top turf trainer, Chad Brown, after Sunday’s workout by Analyze It. A son of Point of Entry, the budding grass star has only made four lifetime starts, and all have come on the green.

Two came last fall in a Belmont maiden race and a graded stakes at Del Mar, and one this spring in the Grade 3 Transylvania Stakes at Keeneland. Each were nothing short of things of beauty. Close to the pace early, Analyze It looked like a man amongst boys as he waited patiently to kick in an overpowering turn of foot that effectively ended each contest in a matter of strides.

Then came a very strange race in his last, where for the first mile of the Pennine Ridge, the bay colt looked exactly like his first three performances. Something went wrong, though, in the final eighth of a mile, as he was run down late by the horse he had seemingly put away early in the stretch.


That bizarre-looking neck defeat, in a time of 1:45.78 for 9 furlongs, is his only blemish on an otherwise sensational start to his career. I’m willing to discount that final furlong as an aberration, and expect a rebounding effort for a colt I believe can be one of America’s best grass horses in recent memory. Having said that, he will find some serious competition in his biggest test to date.

First, let’s consider Hawkish, another lightly raced runner who has raced exclusively on turf in his four-race career. Also in search of his first Grade 1 score, the gelded son of Artie Schiller has shown tons of potential for trainer Jimmy Toner right from the get-go. A first-out winner of a maiden race at Gulfstream Park in January, in which he zoomed past the field late, he comes in off stylish score in the Grade 2 Penn Mile.


Owned by Robert LaPenta, AJ Suited Racing Stable, and Madaket Stables, Hawkish is also one loss short of a perfect record. His lone defeat came in his second career start when he moved right into graded stakes racing for Gulfstream Park’s Palm Beach Stakes. Since then, he has been very impressive in an allowance win at Aqueduct, and then his initial stakes score at Penn National. While Analyze It is bred to run long, Hawkish might end up being best at a mile, so the 1 1/4-mile trip of the Belmont Derby could be a challenge.

Next we have Catholic Boy, the horse who actually defeated Analyze It. As odd as it looked for the runner-up, nothing should be taken away from this Jonathan Thomas-trainee. He ran a huge race in winning the Pennine Ridge over the Belmont turf, in what was his return to grass after joining the Kentucky Derby trail last fall.

His dirt form was certainly not bad, including a nice win in the Remsen Stakes, but the son of More Than Ready looks to be best running on the turf. As true with both Analyze It and Hawkish, Catholic Boy is also 3-for-4 on grass. A stakes winner at Saratoga last summer, he was beaten only 1 1/2 lengths by the uniquely talented Mendelssohn in last fall‘s Breeders’ Cup Juvenile Turf. His impressive return to the grass last month signals him as another with major potential as a turf runner.

As good as these three budding turf stars look so far, the Belmont Derby is far from a three horse race. Chief among the others include My Boy Jack, a stakes winner on both turf and dirt, who ran a very good race to finish fifth at this same distance in the Kentucky Derby, and Hunting Horn, an Irish-bred colt from the powerhouse barn of Aidan O’Brien, who won a Group 3 at Ascot on June 21 in commanding style.

The Grade 1 Belmont Derby is as good as it gets for 3-year-old turf horses in the United States. Whether it be my top pick, Analyze It, or another, the winner of this one will be well on their way to becoming a new star of American turf.

Johnny Sue can make the grade in open company | Horse...