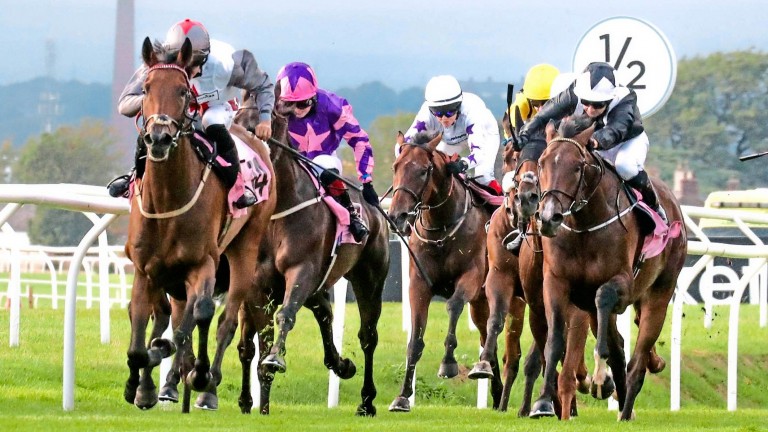 Island Song (left) bids to pick up the winning thread

This afternoon’s action at Doncaster, Listowel and Ffos Las is not yet over, but here are three to watch at Hamilton’s twilight meeting.

Defence Treaty is the only unbeaten horse on this afternoon’s card. That is largely because he is also the only unraced horse at the meeting. But there is more than the ‘could be anything’ or ‘is yet to prove his limitations’ argument surrounding the Richard Fahey-trained juvenile.

He is from a yard that does very well with debutants, is a brother to a six-furlong winner and set Steve Parkin of Clipper Logistics fame back £100,000 at the Goffs Doncaster Premier Yearling sale last August.

Three of his rivals are homebreds, but the other three passed through the sales ring for a combined 88,000gns, so this son of Dandy Man is certainly of interest.

The obvious conclusion when a horse racking up a sequence is finally reacquainted with defeat is that the handicapper has finally got hold of the animal in question and a few gallant defeats will be necessary before dropping a few pounds and having another chance to win.

But sometimes it is merely a blip. After joining Tristan Davidson, Island Song has won three on the bounce and rose from a mark of 46 to 61 in doing so. She was beaten into second last time by a length and a quarter when sent off favourite.

But the handicapper put her up another pound for that defeat in a lady amateur riders’ event and the fact she lost her place with half a mile to run and took two furlongs to get back in the contest, and yet still managed to close on the clear leader suggests that with a smoother passage she could be capable of regaining the winning thread.

Roger Varian is an infrequent visitor to Hamilton. In his eight-year career he has sent just 15 runners on the 740-mile round trip to the Strathclyde course, but four of them have won and in Tolkyn he looks to have another likely contender.

In three starts the filly has earned an official rating of 80 and should be more than up to landing a novice contest such as this. She races in the Nurlan Bizakov silks made famous by Askar Tau and is a half-sister to Tomyris, a Group 3 winner who contests the Group 2 Park Stakes at Doncaster on Saturday.

editor - May 4, 2018
0
SATURDAY’S ITV RACES 1.50 NEWMARKET EXAMINER has an each-way shout at a big price in this tough contest. He impressed when battling to win on...

Definitly Red taken out of Grand National by Brian Ellison –...

Natalie’s out to rediscover the joy after Royal Ascot disappointment |...