By the end of Saturday there will be some enhanced reputations and dented ones too after Cheltenham’s Festival Trials card. Tony Carroll is hoping Nelson River falls into the former category once he has tackled the Grade 2 JCB Triumph Hurdle Trial.

Unbeaten in both hurdle races to date, Nelson River was a course-and-distance winner last month in another Triumph trial when beating Fanfan Du Seuil by a length, but Saturday’s race promises to offer a stiffer examination.

Carroll has faith in the son of Mount Nelson, who is owned by the four-strong Cccp Syndicate, and the trainer said on Wednesday: “Obviously, this is another big step for him and we’ll see where he takes us. 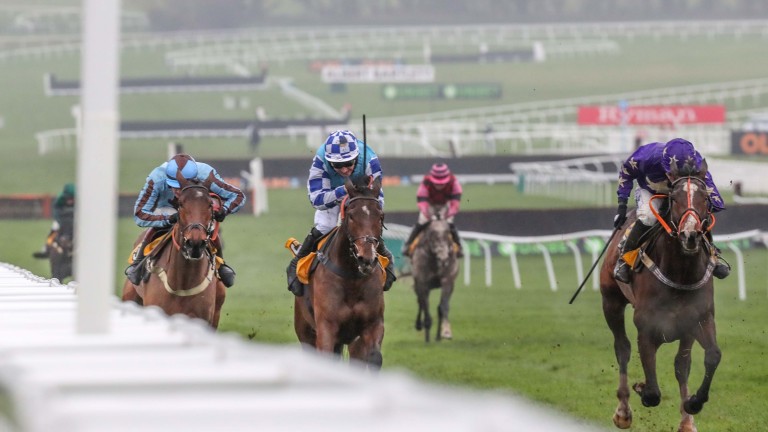 “Everything so far has been good and we’re looking forward to Saturday. It’s all experience for him as he’s a very raw horse. What you see is what he is; he’s just a nice big horse.”

Jockey Harry Bannister is also looking forward to testing Nelson River against some promising opposition and thinks the four-year-old’s previous Flat experience could stand him in good stead.

“He’s exciting and he’s not done anything wrong,” Bannister said on Wednesday. “I think he’s battle-hardened from the Flat and that’s helped make him a bit tougher at the end of the race.

Harry Bannister: “He’s exciting and he’s not done anything wrong”

“He’s got track experience, his jumping is very good and there’s a lot to like about him. He’s exciting and hopefully he carry on his upward curve.”

Nelson River is available at a top-priced 10-1 with Coral for Saturday’s race and can be backed at 40-1 for the Triumph Hurdle, odds that could be on the generous side.

Bannister added: “I’m not saying he’s going to win it but I’d be disappointed if he’s not in the first three or four on Saturday. You know he’s going to be strong at the death, and if they do get away from him you know he’ll keep picking up when they hit the hill.”

editor - January 1, 2019
0
A trio of traditional co-features gets the new season of horse racing at Caymanas Park off to a flying start Tuesday afternoon, beginning with...