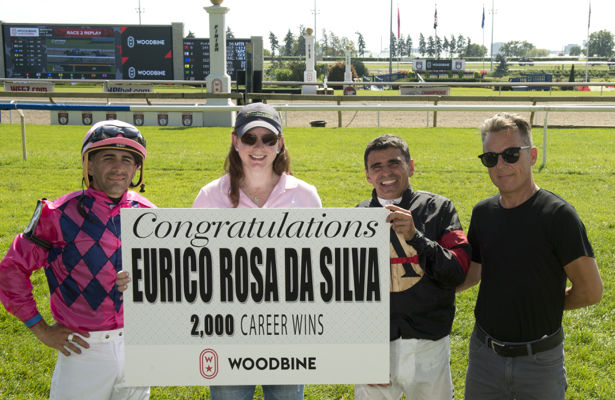 Da Silva earned the milestone victory in the second race aboard favorite Intanga Rose, who won the allowance optional claiming race for two-year-old fillies over six furlongs on the main track in 1:11.48. The Stronach Stables’ homebred Animal Kingdom filly is now undefeated in two starts at Woodbine. She is trained by Hall of Famer Sid Attard, who also recently celebrated his own 2,000th career win in late-July.

Sent postward as the 2-5 favorite, Intanga Rose and Da Silva trailed the five-horse field early on then changed up wide on the outside down the backside before running on past the front-striding Si Si Tequila in the stretch to score by more than two lengths. Intanga Rosa returned $2.80 to win.

Da Silva admitted to being on pins and needles ahead of the landmark victory.

“The filly ran a good race,” continued Da Silva. “She made me relax because I had so much horse in the turn, I knew it was over. When I moved, she just opened up.”

Da Silva, who noted his appreciation for all the trainers and owners that offered him a leg up through the years, struggled to identify just one special horse amongst the 2,000 winners.

“Every single horse I rode is special for me. I have so many good horses and they all try so hard, from stakes horses to cheap horses,” said an emotional Da Silva. “I ride a lot of horses that run for $8,000 or $10,000 and they are in my mind right now and I want to thank them all so much. I cannot say any names, I’m so grateful for all my horses.”

A 43-year-old Sao Paulo, Brazil native, Da Silva came to Woodbine in 2004 and has enjoyed tremendous success since. He was a part of Horse of the Year campaigns by Pink Lloyd (2017), Up With the Birds (2013), Biofuel (2010) and Fatal Bullet (2008), and himself was named Canada’s Outstanding Jockey five times.

The multiple graded stakes winning jockey heads into Ricoh Woodbine Mile weekend with a full stakes schedule. His line-up includes Mr Havercamp in the $800,000 Grade 1 main event on Saturday as well as Hallie Belle in the Grade 2 Canadian Stakes Presented by the Japan Racing Association, Pink Lloyd in the Grade 3 Bold Venture Stakes and Moonlit Promise in the Sweet Briar Too Stakes. On Sunday, he will ride Artilena in the Grade 1 Natalma Stakes, Avie’s Flatter in the Grade 1 Summer Stakes and Be Vewy Vewy Quiet in the Vice Regent Stakes.

Coneygree a possible for Cotswold Chase despite overreach injury | Horse...