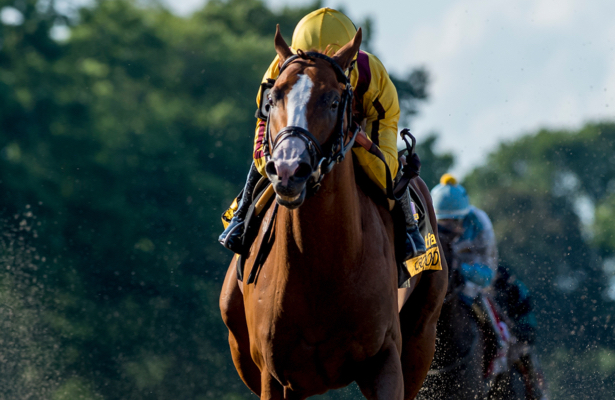 An eclectic group of contenders has gathered for Saturday’s Grade 1, $1.25 million Travers Stakes at Saratoga, where 11 are expected to go postward Saturday in the Mid-Summer Derby.

Good Magic should receive favoritism, while the headlines belong to Wonder Gadot, a filly attempting to make quite a bit of history at the Spa. Adding to the intrigue, last-out Grade 1 winner Catholic Boy switches back to dirt, and Gronkowski’s making his first start since a runner-up in the Belmont Stakes.

The New York Racing Association will conduct the post position draw at 6 p.m. ET Tuesday. Before then, here’s a look at the field with an early morning line by Horse Racing Nation:

Good Magic, 3-1 (Curlin — Chad Brown/Jose Ortiz — 8: 3-3-1 — $2,945,000): The three-length Haskell Invitational winner should go as the favorite here, and rightfully so. Aside from a flat third in the Fountain of Youth to open his season, Good Magic has showed up in big spots. During his career, races run at 1 1/8 miles and shorter have stood out. However, both his starts longer than that in the Kentucky Derby and Preakness came while chasing Justify. That left the 2-year-old champ running on empty late. Whether he’ll have something left with the Triple Crown winner no longer a concern is the big Travers question. He’ll get the distance, but is he best at it?

Catholic Boy, 5-1 (More Than Ready — Jonathan Thomas/Javier Castellano — 8: 5-1-0 — $1,172,000): The Belmont Derby Invitational winner switches back to the main track, where he’s been deceptively good. A dominant winner of the Remsen Stakes last December, Catholic Boy nearly won Tampa Bay Downs’ Sam F. Davis off the layoff over Flameaway, who’s always game. He was then fourth in the Florida Derby but bled in that race. Both his victories since returning have been gutsy on the grass to boot. Thomas thinks 10 furlongs is this colt’s best distance, and he seems to fire no matter the pace scenario. Proven at the distance, and dirt shouldn’t be an obstacle.

Wonder Gadot, 6-1 (Medaglia d’Oro — Mark Casse/Irad Ortiz Jr. — 13: 5-4-3 — $1,381,261): The addition of blinkers has done wonders for this one, the first filly since 1979 to start in the Travers and also looking to become the first to win it since Lady Rotha in 1915. Because of all the hype, you’re not likely to get a good price despite the history against Wonder Gadot. Still, this is the “now” horse with a 1 1/4-mile win already on her resume via Woodbine’s Queen Plate. Casse has raved about her workouts, and Wonder Gadot seems to make her own trip. Of a larger build, she’s the right type to take on the boys. She earned the chance to take on history.

Gronkowski, 6-1 (Lonhro — Chad Brown/Joel Rosario — 7: 4-2-0 — $415,644): In his first race in America, on dirt and longer than a mile, Gronkowski salvaged a runner-up finish with a strong move in the Belmont Stakes after missing the break. Conventional wisdom says he could improve with a stronger start. But the colt also missed some training between starts, enough that he bypassed the local prep, the Jim Dandy Stakes. That’s a question mark, as is his effectiveness cutting back to 1 1/4 miles. If he repeats his final 10 furlongs of the Belmont, however, Gronkowski is a contender here. You’ll need him at least underneath on tickets.

Mendelssohn, 8-1 (Scat Daddy — Aidan O’Brien/Ryan Moore — 9: 4-1-1 — $1,997,137): In a surprising development last week, the $3 million colt was mentioned as a Travers contender off a third-place effort as the favorite in the Dwyer Stakes. Mendelssohn had every opportunity that day but just looked flat in his first start since eased in the Kentucky Derby. Is he a better turf runner? Or can he show that UAE Derby-winning flash again? Connections still want to try the Breeders’ Cup Classic, but Mendelssohn’s going right back into the deep end without much local training. What is it they say about trying the same things over and over, expecting something to change? Again a risky bet, unless he turns his form around.

Bravazo, 10-1 (Awesome Again — D. Wayne Lukas/Luis Saez — 12: 3-3-1 — $981,528): Lukas is comparing this one to Will Take Charge, a horse with which he won the 2013 Travers after running all three legs of the Triple Crown and one race between. The Hall of Famer also said Bravazo lost a shoe in the Haskell when beaten three lengths by Good Magic. We know the distance isn’t a problem, but the Calumet Farm homebred is an inconsistent sort, presenting another challenge to handicapping this race. He shouldn’t be right at the front early and sizes up as a contender if the pace breaks down. Looks like the type that could hit the board.

Tenfold, 10-1 (Curlin — Steve Asmussen/Ricardo Santana Jr. — 6: 3-0-1 — $679,200): In making his sixth start a winning one in the July 28 Jim Dandy, Tenfold earned some needed experience. Santana Jr. said his mount bore out in the stretch when he saw the Saratoga video board. Is there a way to fix that before the Travers? If so, he could factor with the breeding to get the distance. Tenfold was an even fifth in the Belmont, really not much of a threat to those in front of him. We’ll see here if he has Grade 1 speed. Possible board hitter, but don’t envision a win.

Vino Rosso, 12-1 (Curlin — Todd Pletcher/Javier Castellano — 8: 3-0-2 — $792,500): In his first race since contending in the Kentucky Derby and Belmont Stakes, this one ran on late — really, really late — for third in Saratoga’s Jim Dandy back on July 28. More than 10 lengths out of it, he closed to within 3/4 back at the wire. Vino Rosso has always had his supporters but to this point has also burned plenty of money. Here, you figure to get a solid runner at a nice price. If he can get away from the gate better, this could be the race where he breaks through. A nice runner who should offer some value.

King Zachary, 20-1 (Curlin — Dale Romans/Robby Albarado — 7: 3-0-2 — $197,650): After winning back-to-back races at Churchill Downs, he was the one to beat in the Indiana Derby. And on July 14, he was beaten indeed 2 3/4 lengths by Axelrod, whose connections chose not to run in the Travers, opting for a softer spot in this weekend’s Smarty Jones Stakes at Parx. So that’s not a great sign, plus he’s one of many in this field who want to stalk the lead and pounce late. It would take a career-best effort for him to contend, though local works are sharp. You’ll get a nice price if you like him.

Trigger Warning, 25-1 (Candy Ride — Michael Rone/Irwin Rosendo — 12: 4-1-2 — $257,778): He was 86-1 as a surprising third in the Ohio Derby, then lost the Indiana Derby by just a head when setting the pace going 1 1/16 miles. That appears his best trip — see if they can catch him — but Trigger Warning has varying running lines throughout his well-traveled career. He could be the longest shot on the board again Saturday and has proven horse players wrong before. This is a different sort of class test, though. Could be in over his head.

Meistermind, 30-1 (Bodemeister — Steve Asmussen/Manny Franco — 6: 1-0-1 — $44,431): He is the rare purchase who sold for more as a yearling than as a horse of racing age and enters this spot off a fifth-place effort in a Saratoga allowance. His ownership is the same as Triple Crown winner Justify, however, so they must see something in the colt to give him this chance. The Saratoga defeat came on a muddy track, and two back he scored by 6 1/4 lengths going 10 furlongs at Churchill Downs. Likely, that’s the effort that gave Asmussen the green light for the Travers. The final time was 2:03.91 — fast enough? Taking a major step up in class, likely at an inopportune time.

Summary: This is an exciting renewal of the Travers, and one where you can make an argument for potentially more than half the field to win it. Many signs are pointing to Vino Rosso, who had a tough trip in the Derby and was cost a placing in the Belmont when rushed at Justify through the turn. This will be his first true try at 10 furlongs, and he could shine at a decent price, while Good Magic may be better suited for shorter distances. Gronkowski remains somewhat of a mystery — enough that you’ll have to play him in some way — and both Wonder Gadot and Catholic Boy are in career-best form.

Reports: Trio of updates on the Pegasus World Cup field