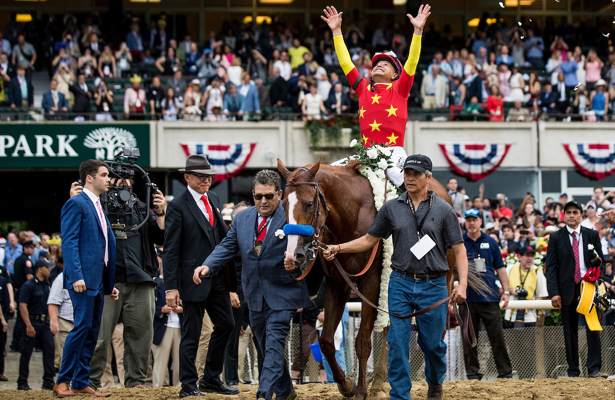 The nomination period for all 3-year-old Thoroughbreds to compete in the 2019 Triple Crown series – the $3 million Kentucky Derby, the $1.5 million Preakness Stakes and the $1.5 million Belmont Stakes – are due Saturday.

Early Triple Crown nominations cost $600 and can be made at thetriplecrown.com or by calling the Churchill Downs Racing Office at (502) 638-3825. Information regarding mailing or faxing nomination forms can also be found online.

The 2019 Triple Crown opens Saturday, May 4 with the 145th running of the 1 1/4-mile Kentucky Derby a tChurchill Downs in Louisville, Ky. The 144th Preakness, its 1 3/16-mile second jewel, is set for Saturday, May 18, at Pimlico Race Course in Baltimore, Md. The 151st running of the Belmont Stakes, the series’ 1 2/-mile final leg, is scheduled for Saturday, June 8, at Belmont Park in Elmont, N.Y.

Last year’s early phase of Triple Crown nominations attracted 360 horses, including eventual Triple Crown champion Justify. An additional 10 Thoroughbreds were made eligible during the late nomination period to raise the overall total to 370.

The late nomination period, which requires the payment of $6,000 for each nominated 3-year-old, will open Sunday and continue through Monday, April 1.

Three-year-olds that were not nominated to the Triple Crown during either the early or late nomination phases have a final opportunity to become eligible for the races through payment of a supplemental nomination fee. Due at the time of entry for either the Kentucky Derby, the Preakness or the Belmont Stakes, the supplemental fee process makes a horse eligible for the remainder of the Triple Crown series. A supplemental nomination at the time of entry to the Kentucky Derby requires payment of $200,000. The fee is $150,000 if paid prior to the Preakness or $50,000 at time of entry to the Belmont Stakes.

Representatives of the Triple Crown host tracks include:

editor - June 18, 2018
0
RACING takes place at Nottingham today and we have you covered with all the latest runners, results, tips and going news. Get yourself along...

Singapore Pools to take over horse betting operations from next year,...

Doncaster abandoned in effort to preserve Town Moor for today