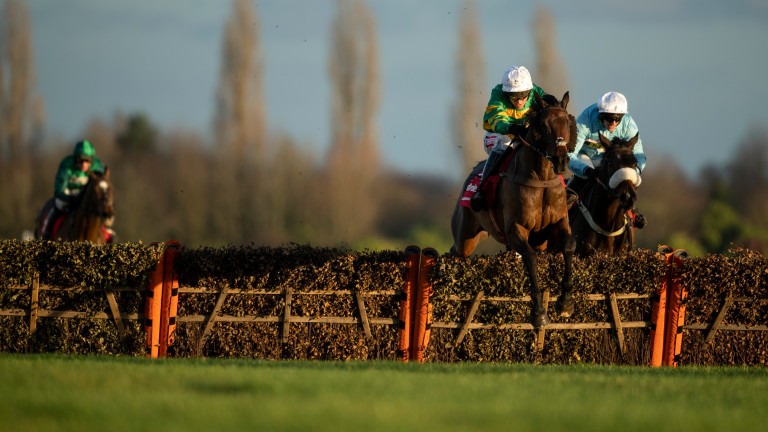 Unowhatimeanharry leads over the last hurdle en route to victory

JP McManus may be one of racing’s biggest spenders but it is all worth it for moments like watching Unowhatimeanharry landing a second Ladbrokes Long Distance Hurdle.

After disappointing in the Stayers’ Hurdle at the Cheltenham Festival, the ten-year-old gelding had a wind op and a summer’s recuperation at McManus’s Martinstown Stud. A nice prep at Aintree and the addition of cheekpieces had then all supposedly put him right for this, and with his big-punting owner present he was backed into 11-4 favouritism (from 4).

Yet at one point it looked like his chances of following up his 2016 victory here were all but extinguished.

“I thought it wasn’t likely and Noel [Fehily, riding Fry’s other runner Momella] said he went past him thinking ‘that’s not going to win’, so he was surprised we had,” said Fry. “But Barry [Geraghty] said he jumped his way into it at the third-last and he’s just a brilliant horse.

“He hasn’t won for over a year and at the end of last year it looked like things were on the wane.

“I’m delighted to get him back in the winner’s enclosure, I’m not saying we’ll go and win a Stayers’ Hurdle as an 11-year-old, but he’s done us proud and every win now is a bonus.”

McManus has won virtually every jumps prize going, but this one seemed to matter more than most.

“There are certain horses you get more pleasure from than others, and Harry’s one of those,” he said.

It was an bittersweet conclusion to the race for Fry with Momella falling at the second-last. “I was trying to keep one eye on Momella and Noel and make sure they were in one piece – which they are so that’s first and foremost – but it made for a slightly strange climax to the race,” he said.

Races such as this can often be shadowed by their Cheltenham implications, but this was not one of them. Ladbrokes went 25-1 about the winner for the Stayers’ Hurdle and none of McManus, Fry or Geraghty wanted to talk about the festival afterwards. They were happy just to bask in the glory of one of their favourites proving he still has the heart for the fight. 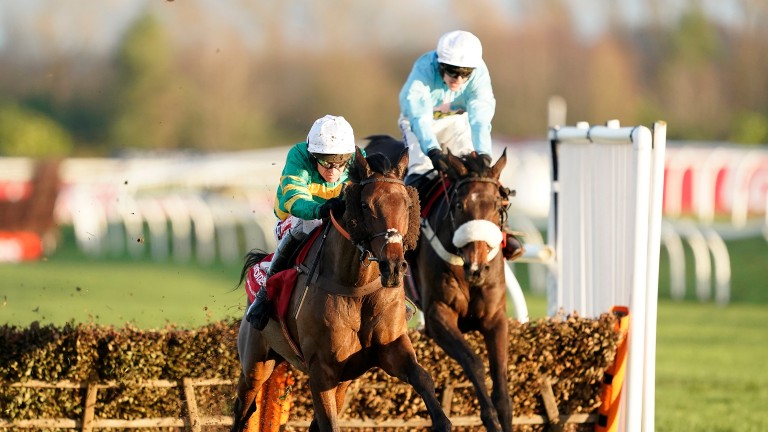 The Evan Williams-trained Clyne, who was making his first start over the distance, took second, while The Mighty Don took third for the in-form Nick Gifford. Market rivals Sam Spinner (unseated second-last) and Wholestone (finished last) were beaten a long way out.

Williams said: “I’m delighted, I suppose that [staying trips] is the way to go now isn’t it? He won’t go right-handed, he’s lugged left from flagfall so he’ll go to Cheltenham on New Year’s Day. He wants wet, heavy ground. He overraced early, got outpaced and stayed on, it was very good.”

Last season’s Stayers’ Hurdle favourite Sam Spinner was well beaten when unseating two from home and his trainer Jedd O’Keeffe said: “He’s fine, he’s got the tiniest wound on his hind leg but other than that he’s absolutely fine. He did definitely need the race and touch wood he will improve off the back of this, but possibly he was a little bit flat as well. The plan is still to go to Ascot for the Long Walk, that’s his target and, barring any complications, remains so.”

editor - March 19, 2018
0
There will be an inspection for this meeting at 8am. RACING takes place at Limerick today and we have you covered with all the...