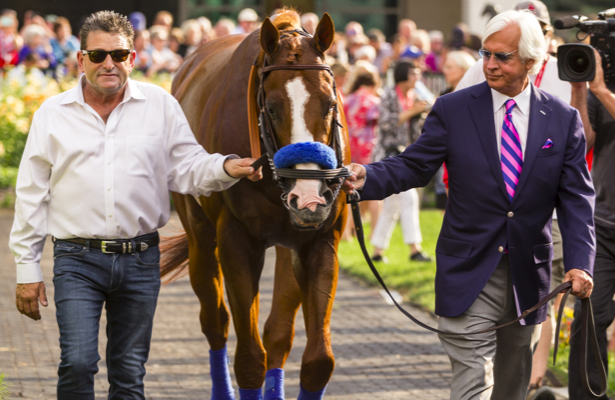 Walden said it’s “that’s our expectation” — meaning an ownership group that includes WinStar, China Horse Club, Head of Plains Partners and Starlight Racing — that the colt will run a complete 3-year-old campaign, with the Breeders’ Cup Classic at Churchill Downs an end goal.

“Of course, he’s going to have to cooperate on his end,” Walden said of Justify. “We’re not going to do anything that would hurt that. He’s doing great. He come out of the race great. We’re looking forward to running him again.”

Walden told Luck that upon Justify’s return to trainer Bob Baffert’s base Sunday at Santa Anita Park, Baffert informed him the colt had lost just three pounds since departing California for the Kentucky Derby on April 30.

“That’s an incredible amount of fortitude Justify has to be able to hold his weight through that whole campaign,” Walden said.

On Sunday, the Daily Racing Form quoted Bob Baffert as saying the Haskell is a “first option” for the son of Scat Daddy. In a Monday interview with the Albany Times-Union, Baffert denied saying that, echoing previous statements that he would confer in the coming weeks with WinStar about Justify’s future.

“We’ll see,” Walden said of the Haskell. “We haven’t decided yet, and we won’t decide for a few weeks. Bob and I both decided that. We’ll just see how he trains and take it from there.”

“We are living the dream,” he said just before Yoshida ran a respectable fifth in the Queen Anne. “It’s just been an incredible spring.”