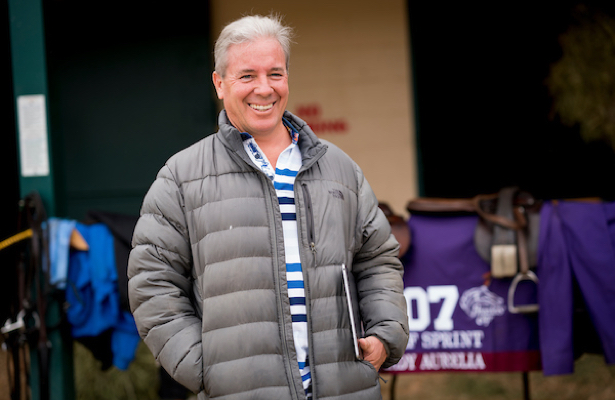 Well known for his precocious 2-year-olds on the turf, trainer Wesley Ward said Friday that he could have as many as five runners between the $150,000 Futurity and the Grade 3, $150,000 Matron, both for juvenile grass sprinters next weekend at Belmont.

Ward said Calumet Farm’s Fayette Warrior is likely to target the Futurity on Sunday, October 6, a Breeders’ Cup “Win and You’re In” qualifier for the inaugural Juvenile Turf Sprint on Future Stars Friday, November 2 at Churchill Downs, while Egoli is on course for the Matron for fillies on Columbus Day Monday, October 8.

Ward added that Shang Shang Shang, winner of the Group 2 Norfolk at Royal Ascot this summer, may make her stateside return in the Matron. Dragic, a 2-year-old filly by Broken Vow, is currently being considered for both divisions, and Ward said he will decide whether he wants to add another runner to the mix in the coming days.

Fayette Warrior, by Exchange Rate, wore blinkers in his debut August 13 at Saratoga Race Course, racing just off the pace over good turf before fading late to finish seventh. He came back with blinkers off in September and pressed a mild early pace before kicking clear to an impressive 4 ¼-length maiden victory at Kentucky Downs.

“He’s had a decent enough race first time out. He’s a nice colt, but he was a little green at Saratoga. And firing back, he just blitzed them at Kentucky Downs,” said Ward. “He’s had some very nice breezes on the dirt at Keeneland since, so I’m looking forward to it. It’s a stern test and we’ll see what he’s made of, but he’s certainly a talented little horse, that’s for sure.”

Ward said it took a while to find a race for Egoli, owned by Clearview Stable and China Horse Club International, but the Quality Road filly was worth the wait, proving much the best winning a five-furlong maiden special weight at Belterra Park by 1 ¼ lengths on September 16.

“She’s an extremely talented filly. We had her in Saratoga and she was rained out of the races a few times there and we just couldn’t get in, unfortunately,” he said. “We got her back to Kentucky and pointed for one of those races at Kentucky Downs, but we couldn’t get her in. So, we took her to Belterra and she ran just a phenomenal race. Irad [Ortiz, Jr.] was breezing her at Saratoga and he just loved her. He was even going to fly out to ride her, but we got rained out the first time [she entered at Belterra]. The fact that a tiger like that wanted to come all the way out there just to ride her says a lot about her talent I think.”

Breeze Easy’s Shang Shang Shang hasn’t raced since recording a nose victory in the Norfolk on June 21, which nabbed her the first all-fees-paid berth into the new Breeders’ Cup contest. She was entered in the Skidmore on August 17 at Saratoga, but was scratched before the race due to a foot bruise.

“She had a few fantastic breezes at Saratoga and then she kind of bruised a heel,” said Ward. “She’s such a nice filly, so just as a precaution, I called the owners and ultimately, we decided to scratch. When in doubt, I’m usually out. I just had a little bit of a feeling that things might not be right and I didn’t want to take any chances. We gave her some time to get over that foot and she’s had some wonderful breezes at Keeneland, so she’s definitely nearing her return.”

Steven Bell’s Dragic made a switch to the grass last time out, finishing third against males in the Kentucky Downs Juvenile at a mile on September 1. Beginning her career on the main track, the Broken Vow filly easily broke her maiden in April and came back nearly four months later to finish fourth in the Grade 2 Sorrento on the dirt at Del Mar.

“Prior to going out to California, I breezed her on the grass at Keeneland and it was an eye-opening breeze,” said Ward. “Her pedigree suggests no turf at all, but if you watch her moving over the grass, she’s certainly taken to it. She had a very valid race in California, it turned out to be a really quality field. She was a little comprised at the break, she got away a step slow, and was down there on the inside, which is something that mine aren’t used to, and she still only got beat a length for second.

“She’s pretty quick, pretty handy, she’s got some nice racing experience and I think with the cut back in distance, she’s going to be tough anywhere she goes.”

At his ‘best,’ Delta Prince looks to rule Woodbine Mile

Mark Howard: Five to follow | One Jump Ahead author with...