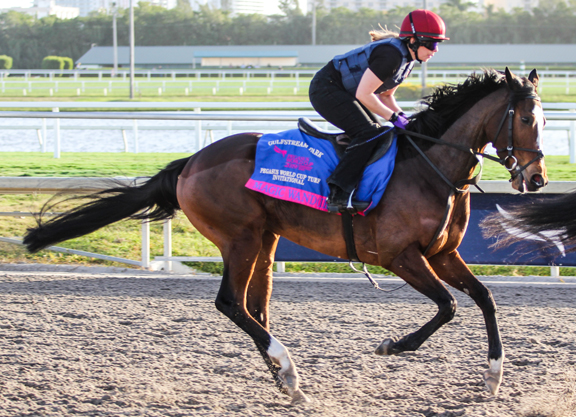 HALLANDALE BEACH, FL.–Though the temperatures were in the low 70s, it was a cloudy, blustery morning at Gulfstream Park with winds gusting between 20 and 30mph as Pegasus World Cup week began to rev up.

Morning-line favorite Accelerate (Lookin at Lucky) arrived in Florida Tuesday evening and apparently was not jet-lagged after his trip from California, hitting the track early under the cover of darkness. In traditional D. Wayne Lukas fashion, MGISP Bravazo (Awesome Again) also put in his morning exercise before dawn. Also on the scene early was GI Breeders’ Cup Dirt Mile hero City of Light (Quality Road).

As the sun began to shine through, pushing away the clouds, around 7:45a.m., just after the renovation break, the Japanese runner Aerolithe (Jpn) (Kurofune) caught the eye as she jogged the wrong way towards the gate. While the striking gray schooled in the gates, one of her inaugural GI Pegasus World Cup Turf S. competitors Magic Wand (Ire) (Galileo {Ire}), who will represent the powerhouse duo of Coolmore and Aidan O’Brien, passed by at an easy gallop.

“It was [Aerolithe’s] first time with a gate boy, but we think it would be advantageous for her to have one, so she gets a nice clean start. If she gets one, she will have every chance in the world,” said Kate Hunter, Pegasus World Cup field representative and translator for the Japan Racing Association.

After completing her gate schooling without incident, Aerolithe returned to the track, jogging the right direction through the stretch before picking up the tempo on the backside. With trainer Takanari Kikuzawa in the irons, the stunning dappled gray breezed an easy four furlongs in :51.15 (15/19) into a very strong headwind, finishing up well and with ears pricked (video).

“Typically in Japan, we do breezes on Wednesday,” Hunter explained. “We gave her some rest and relaxation when she got here, so it was always the plan to breeze her on Wednesday. She has been going really well over the dirt so far. Her trainer commented about the horses going every which way, with everyone making their own decisions. That is not how they do it in Japan. It is a little bit more controlled there, so her trainer had to get used to that going out there in the mornings.”

Several other contenders for both Pegasus races took their time getting to the track, putting in their morning gallops after the next renovation break around 9:30a.m., including Mexican sensation Kukulkan (Mex) (Point Determined) and Stronach Pegasus runner Something Awesome (Awesome Again). Also on track during that time slot was striking GI Shadwell Turf Mile winner Next Shares (Archarcharch), who successfully stretched out in the nine-panel GII San Gabriel S. and looks to repeat in the Pegasus Turf.

The rest of the contenders for both Pegasus races based at training facilities around the Sunshine State made their way into Gulfstream after training hours concluded Wednesday in compliance with the 72-hour policy. Among them were GI Breeders’ Cup Classic runner-up Gunnevera (Dialed In) and last term’s GI Florida Derby hero Audible (Into Mischief), who also schooled in the paddock before the fourth race with stablemate and GIII Fred Hooper S. contender Copper Town (Speightstown).

what time is the horse racing on ITV4 TODAY?

Kayley Woollacott: Lalor will be ‘electric’ on better ground | Horse...

Full results from day three of the 2018 Royal meeting