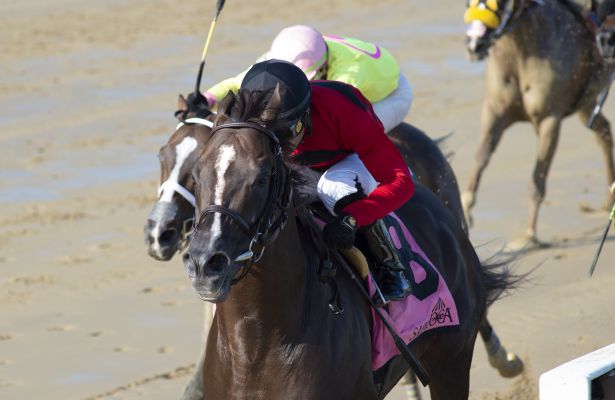 Red and Black Stable’s Weekend Hideaway set the speed and survived Celtic Chaos’ stretch-drive challenge – and a trainer’s objection – to post a front-running victory by 1 1/4 lengths in the 15th running of the $100,000 John Morrissey for New York-bred 3-year-olds and up on Thursday at Saratoga Race Course.

Under jockey Luis Saez, Weekend Hideaway tracked Eye Luv Lulu early and surged to the front on the backstretch, leading the seven-horse field through the opening quarter-mile in 21.77 seconds and the half in 43.93 on a muddy and sealed main track.

Eye Luv Lulu finished a nose in front of Celtic Chaos for second, though Celtic Chaos trainer Brad Cox lodged an objection against Weekend Hideaway, claiming he did not maintain a straight line in deep stretch. The stewards ruled there was no change, affirming Weekend Hideaway’s first win in his last nine starts.

“He loved the mud. I loved the way he ran today,” Saez said. “When we broke and I saw the speed was not that hot, I let him go and he was energetic. He ran hard in the stretch.

“I was on the lead and controlling the pace. When I came to the stretch, my horse came out a little, but I corrected him and tried to stay in my line. It looked like the other horse [Celtic Chaos] was coming, but he didn’t come with the fastest speed to get in the hole. I was there and never came out at that point and stayed in my line. I think the stewards made a good decision.”

Weekend Hideaway won for the first time since he captured the Commentator on May 2017 at Belmont Park. The 8-year-old son of Speightstown won the John Morrissey for the second time and first since the 2014 edition.

“One year ago today, this horse was just as ready as he could be to run in this race and unfortunately, he grabbed his quarter,” trainer Phil Serpe said. “He abscessed and we didn’t realize it until the morning of the race, because he was fine the day before. It really killed me to not see him run last year because I really felt like he was in a position to win, and to come back and do this today was great.”

“I was worried the track was drying out a little bit too much, because that sun’s been beating on it and its gone from pretty sloppy to muddy, so it was worrying me a little bit,” Serpe said. “Look, he’s a great horse. He does this stuff on his own and we’re just happy to be along with him.”

Eye Luv Lulu, trained by Jason Servis, finished on the board for a fifth straight start, building on a third-place effort in the Grade 2 Belmont Sprint Invitational on July 7 at Belmont. Celtic Chaos, who won the John Morrisey last year, was third.

Gold for the King, Mighty Zealous, Long Haul Bay and T Loves a Fight completed the order of finish. Runaway Lute was a late scratch.

editor - January 3, 2019
0
FOR a Friday it's a quiet afternoon of racing and we head to Wetherby for the NAP. We've started the year well and hopefully...

Oaklawn news: Hall of Famer Borel and his brother back in...

Oisin Murphy hit with ban that rules him out of Melbourne...

Runaway Ghost Out Of Kentucky Derby With Shin Soreness – Horse...