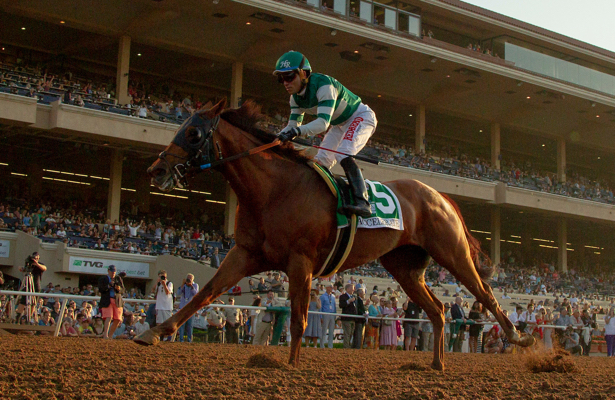 There’s no denying winning the Triple Crown
is a hard task worth Horse of the Year honors. Justify was brilliant in his
undefeated six starts, but his career was short, with his last race coming in
June long before the year is finished.

While scoring in the Kentucky Derby,
Preakness Stakes and Belmont Stakes is one of racing’s most coveted feats, wrapping
up his career early without facing older horses leaves room to argue who Horse
of the Year should go to. While Justify was untouchable, there’s an older horse
on the West Coast making noise this year.

Accelerate has earned his place in the Horse
of the Year argument. A three-time Grade 1 winner this year, the 5-year-old has
swept California’s biggest races – the Santa Anita Handicap, the Gold Cup at
Santa Anita and the Pacific Classic. He is bound for another try at the
Breeders’ Cup Classic, and if he wins, he’ll likely secure year-end honors for
champion older dirt male, a title he is already in the running for.

With three seasons of racing, Accelerate has proven
successful in the older horse division, a chance Justify will never have. Without
the ability to say he beat older horses and six months left for other major
races, there’s room to argue Horse of the Year even with a Triple Crown win.

3-year-old
filly division gets stirred up

Saratoga’s Alabama and Lake Placid provided another
shakeup for the 3-year-old fillies.

Right now Monomoy Girl looks like the division
leader. She is a neck shy of perfect in nine starts and won the Kentucky Oaks
along with multiple other Grade 1 races. Wonder Gadot, the filly running in the
2018 Travers, is also in contention to lead the division. She won the first two
legs of the Canadian Triple Crown, besting the Canadian-bred boys, and will try
to carry that momentum against the boys in the Travers.

The Kentucky Oaks was a tough defeat for
Wonder Gadot, who finished a close second after interference from the winner.
There was no change from the stewards, and the two fillies have not met since
to throw down again.

Also throwing her hat into the ring is
Rushing Fall. Although she is on turf, she is also only a neck shy of being
unbeaten in six starts, and she dazzled with a dominating performance this
weekend in the Lake Placid. Red Ruby was also in contention after runaway wins
in the Black-Eyed Susan and Delaware Oaks, but was knocked out of the Alabama
with an injury in the stable.

Midnight Bisou, third in the Oaks, was considered
highly rated in the division behind Monomoy Girl, but Eskimo Kisses blew her
away in the Alabama, leaving more room to wonder if there is another up and
coming 3-year-old filly.

Perhaps one of the most exciting rides of
weekend came from Flavien Prat in the Del Mar Handicap. Prat made an early,
explosive move aboard Fashion Business to sprint away from the field and win by
5 1/4 lengths. The win also awarded Fashion Business an automatic berth into
the Breeders’ Cup Turf.

Prat said after the race he knew Fashion
Business had a late kick but took a while to get going, so he took a chance
with an early move that paid off. Prat also had a bang-up race two starts
earlier aboard Fashion Business in the Manhattan. Despite finishing fifth in
the Grade 1 at Belmont, the pair closed in a blanket finish and was beaten only
a length.

The Del Mar Handicap was the third win from
12 starts for Fashion Business. If the son of Frankel continues to progress, he
could become a dangerous opponent among the West Coast turf horses.

As racing at Ellis Park grows, it provides
more opportunities for Kentucky-based horses to race in the Bluegrass during
the summer and allows trainers to locally develop 2-year-olds.

Sunday’s Ellis Park Debutante and Ellis Park
Juvenile are two examples. Debutante was brought back last year and the
Juvenile made its return in 2016, where eventual Kentucky Derby runner-up
Lookin At Lee earned his first stakes win.

Lookin At Lee’s connections of L and N Racing
and trainer Steve Asmussen teamed to win the Juvenile again this year with
Tobacco Road, who broke his maiden at Ellis Park one race earlier. Asmussen
also had the runner-up with Whiskey Echo for Winchell Thoroughbreds and Willis
Horton Racing.

The Debutante also produced a very impressive
winner in Serengeti Empress, who went all the way to win by 13 1/2 lengths.

editor - March 24, 2018
0
RACING takes place at Newbury today and we have you covered with all the latest runners, results, tips and going news. Get yourself along...