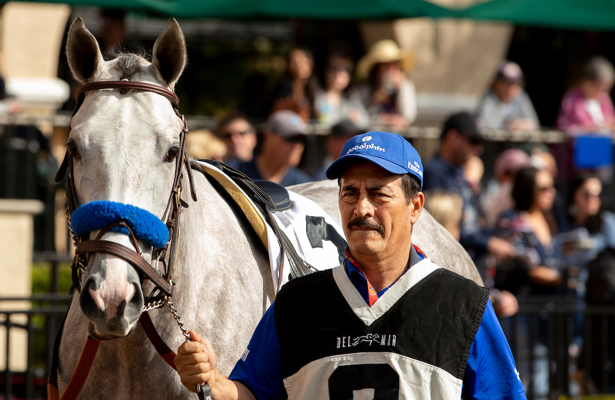 Trainer
Bob Baffert displayed not one, but two, talented-looking juveniles Saturday at
Del Mar. The card was off to an exciting start, with Baffert debuting Godolphin’s
homebred Coliseum in a maiden special weight. In the featured race, the Grade
3 Bob Hope Stakes, Michael Lund Petersen’s Mucho Gusto won his stakes debut.

Both horses were winners, and one a stakes winner, but it was the first-time
starter that left a bigger impression.

“(Coliseum) has been tough to work
with, he wants to run off in his works and it’s been hard to get him to relax,”
Baffert said. “Now we’ve got that race out of the way and we’ll stretch him out.”

These two
come on top of Game Winner, who swept three Grade 1s, including the Breeders’
Cup Juvenile, Street Sense winner Improbable, and eye-catching maiden winners
Roadster and Tale of the Union. In the filly division, he has Chasing Yesterday,
a multiple stakes winner and half-sister to Triple Crown winner American Pharoah,
and Rags to Riches winner Mother Mother.

Baffert has had previous success in both the Kentucky Derby and Kentucky Oaks. If keeps unveiling talented horses at this rate, he stands a good shot at being
back in the winner’s circle for Kentucky Derby 2019.

Cox can get Mr. Misunderstood to Breeders’ Cup

Mr. Misunderstood gave trainer Brad Cox his 999th career victory Saturday in Churchill
Downs’ Grade 3 River City Handicap, one day before Cox reached No. 1,000 at Fair
Grounds. The 4-year-old gelding also appeared to return to his best stride and,
if he continues that form next year, trainer Brad Cox has bigger goals in mind.

“(Mr. Misunderstood) will probably get a little bit of a break before we
bring him back at Fair Grounds,” Cox said, “and if he keeps improving we’ll
keep the Breeders’ Cup on our target for next year.”

Owned by Flurry Racing Stables, Mr. Misunderstood has continuously improved
with Cox. He ended 2016 with a win in claiming, and picked up a couple
allowance wins in 2017 before winning five consecutive stakes, including the Commonwealth
Turf (G3).

Although he didn’t build the same kind of win steak in 2018, he still earned three
stakes wins, including the Wise Dan (G2). The River City score also made him
4-for-4 on the Churchill Downs’ turf.

The Louisiana-to-Kentucky schedule seems to have worked for Mr. Misunderstood the
past two years. It’s a similar schedule the Cox-trained Arklow followed this
year before running fourth in the Breeders’ Cup Turf behind Enable. And it’s
one that could work again for Cox horses looking to get to the 2019 Breeders’ Cup.

Village King, an Argentinian import in the Todd Pletcher stable, won his first
U.S. start in Saturday’s Red Smith Handicap after finishing fourth and third in
allowance company. It’s hard to say if Village King, a Group 1 winner in his
home country, improved that much in his third start since moving stateside or
if he lucked out from the weather conditions.

The Red
Smith originally had an overflow field, but had only six entries run since the
race was moved to the dirt track. That meant scratches from turf stakes winners
such as Bigger Picture, Zulu Alpha, Inspector Lynley and Focus Group.

“This horse had trained pretty well on the dirt. He had also
run well in South America on the dirt, so we felt it was worth a try,” Pletcher
said. “He kept fighting and cut the corner and we ended up on the right end of
a head bob. It kind of gives us a ton of options going forward from here. He
seems versatile, and we’ll see what’s next.”

It was
nine months between Village King’s last start in Argentina and his first in the
U.S. The horse could have needed a couple races in him before getting rolling.
At only 4 years old right now, there’s time for him to come back – whether that
be on dirt or turf – and prove he can be competitive in U.S. stakes.

The Briefing: all you need for the day as Waiting Patiently...

Horse Racing Betting Tips: Shantou Flyer and Cogry can cause the...